My latest "Myeloma Mom" column is up on the Myeloma Beacon web site. I hope you'll go read it when you have a chance, but I suppose I should provide a warning first. The column is about my Aunt Margie, who passed away from myeloma last month. I compare our two cases of myeloma: Mine has always been tame and non-aggressive; hers was wildly aggressive and impossible to stop. In the column, I wonder how the same disease can behave so differently from one person to the next, and it dawns on me that this is why myeloma has proven so impossible to cure.

After the column was posted, I got a comment from the wife of a newly diagnosed patient, telling me the column was disturbing and gave her and her husband nightmares.

I certainly would never, ever want to give a newly diagnosed patient nightmares. I feel bad that I contributed to the stress she's feeling. The main reason I write this blog is to help newly diagnosed patients, to show them that it is possible to live for a long time with multiple myeloma and to live a good life. On the other hand, not every case of myeloma is like mine, and I think people need to know that, too. What Margie and her family went though was an absolute nightmare and shouldn't be ignored. I thought her story needed to be told to show why we need to find a cure for this disease immediately.

Anyway, if you're a newly diagnosed patient or someone who simply doesn't want to hear a myeloma story with a sad ending you might want to steer clear of this column for now. I totally get it.
Posted by Karen at 8:30 PM 5 comments:

The case of the missing M-spike

I had all of my blood tests done last week, and I was told that the doctor's office has just switched to a new lab so there could be a few hiccups along the way. The whole Revlimid process went beautifully (woo!), but the nurse could not find my M-spike. Did they not test it? Has it gotten so tiny that it accidentally got thrown out in the back yard and now must make its way home through a jungle of grass and killer ants like in Honey I Shrunk the Kids? Nobody knows. I'm sure it is totally fine. If it doesn't turn up soon, I'll be getting tested again in three weeks anyway. No worries.

As long as we are talking about the New Kids on the Block, I should tell you about the concert I went to last month, or as I like to think of it, "An Evening With Donnie Wahlberg's Abs".

The first opening act was Boyz II Men. Who doesn't love Boyz II Men? People with cold, dark hearts, that's who. Boyz II Men are down to just three boyz these days, but they are still delightful. They made it rain rose petals during "I'll Make Love to You." And now that song is in your head. You're welcome.

The second opening act was 98 Degrees. I know next to nothing about 98 Degrees. I do know who Nick Lachey is, sort of, and some of their songs sounded vaguely familiar, but my friend Abigail and I used the 98 Degrees time to take a bathroom break, get a drink, and rest up for the two hours of screaming to come.

I'd thought about learning some 98 Degrees songs before the concert, but I wisely decided that I shouldn't get emotionally involved with yet another boy band, for the sake of my mental health. With the emotional upheaval caused by Kevin returning to the Backstreet Boys, I just can't take the stress.

Here's what I noticed about 98 Degrees: Three of the guys were ruggedly handsome, boy-band-looking guys. Then there was this guy. Who is this guy? He doesn't look boy-bandish at all. He looks like Nick Lachey's accountant:

After Nick Lachey and two other handsome guys and the accountant left the stage, it was time for NKOTB. They had everything. Lasers and smoke and flames and giant balloons falling from the sky and pieces of the stage that lifted up during "Hangin' Tough." And, of course, abs.


But the most amazing part of the concert was this:

Jon sang by himself. Twice.

*I'm sure that's not his real name. But it could be.

If you've read my blog for a while, you might remember that about a year ago I came across two fantasy romance novels -- available in Kindle format for $2.99 -- with characters based on the New Kids on the Block.

And if you haven't been reading my blog for long, you just read that sentence and said, "Whaaaat? Karen, I must read these books!"

Yes. You must! Because they were the Best. Dang. Books. Ever. If you missed my reviews, you might want to go back and read my summary of book one ("Second Time Around") and book two ("Second Chances").

About a month ago, the same author released a third book in the series ("Second to None"). Of course, I downloaded it right away so I could report back to all of you. I read it ... and then I didn't know if I should publicly admit I read this book. I publicly admit a lot of things (remember the time I ordered an NKOTB DVD so I could get a scrap of clothing from one of their outfits?) so you know it's bad.

Book three is much different from the other two. My theory is that sometime after writing the second book, the author attended a writing seminar called "How to Write a Book That is Nothing but Disturbingly Graphic Sex Scenes." Mission accomplished, author. Mission accomplished.

I wasn't even sure how to review this book for my blog or even if I should.  But I know that reporting on these New Kids books is a valuable public service I provide, so I needed to carry on. I decided that instead of going into details about the above-mentioned scenes, I would simply insert the following sound effect:

The book opens where book two left off. Fancy, sassy lawyer Kaye is engaged to Josh/Jon, who is super, super, SUPER heterosexual -- not the tiniest bit gay -- in case anyone is wondering. A magazine reporter wants to interview all of the members of Boys From the Block and their significant others about how they met. Josh/Jon is reluctant. Remember his crippling anxiety disorder? He's straight now, but he's still anxious. He finally agrees. To reward him, Kaye gets him alone aboard his private jet and ...

Everyone gathers for the interview. Jared/Jordan and his wife, Erin, tell their story. It begins when they are teenage sweethearts. Erin has been secretly in love with Jared/Jordan for years but is unsure about the relationship because he is a world-famous teen idol who is always being chased by screaming women, blah blah. Years go by, and Erin finally decides she is ready for a disturbingly graphic deflowering by Jared/Jordan. She surprises him in his hotel room while he's on tour and ...

Jared/Jordan has to rush off because he gets word that Dean/Donnie has crashed his motorcycle, so Erin returns the next night to surprise him again, this time wearing sexy lingerie, and:

Next, it's the story of Jake/Joe and his wife, Brennan. She is a sassy, fancy real-estate agent. He really needs some fancy, sassy real estate. They go on a date. Then she doesn't return his calls. He knows the only way to right this wrong. He must hunt Brennan down and become a creepy stalker. He stalks and stalks and stalks and stalks. When that doesn't work, he traps her in an empty house ... but it's not creepy because he has champagne and roses!

Next: David/Danny meets his future wife, Tracy, at a bar, and they head to a hotel for a night of anonymous bow chicka wow wow. Two months later, Tracy's sister just happens to have front-row seats to a Boys From the Block concert. Tracy agrees to go, despite the fact that she knows nothing about BFTB and she is feeling nauseous. (You know exactly what is coming, don't you? I totally had you at "nauseous", didn't I?) Tracy gets to the concert and realizes, "OH MY GOD! ANONYMOUS BOW CHICKA WOW WOW MAN IS A MEMBER OF BOYS FROM THE BLOCK! I'M GOING TO THROW UP!"

She meets David/Danny after the show and they head to the tour bus.

And, of course, shortly afterward she figures out she's pregnant with his baby, blah blah, chicka blah blah.

Then the group interview is all over and Dean/Donnie and his wife head home to take a shower.

First, an M-spike update: My June M-spike was 1.5 -- completely stable from the month before. In July, it actually went down to 1.2. This calls for a photo of Jon Bon Pony: 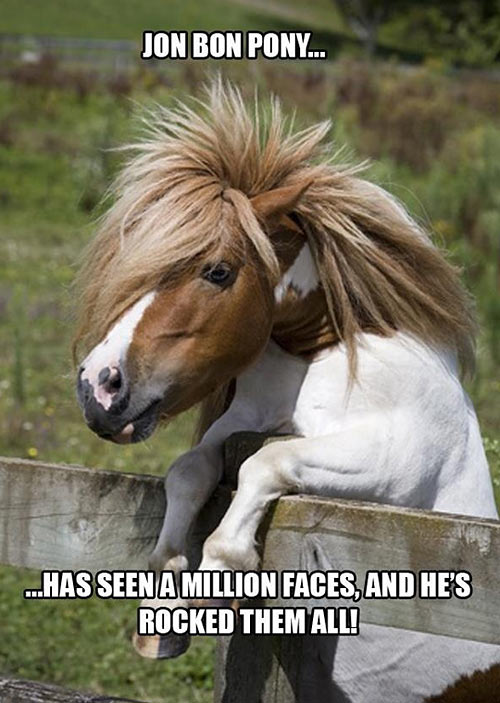 Next, I had another Myeloma Mom column published on the Myeloma Beacon web site at the end of July. If you missed it, you can find it here.

Finally, I've been asked to be a panelist in a call-in discussion about young adults with cancer. It's on Thursday (!!!) and I need to come up with some intelligent-sounding questions to ask. If you have any ideas for questions, please let me know! Here's a link to info about the discussion.
Posted by Karen at 5:46 PM 6 comments:

Why I've been away

I've been away from the blog for a long time, but I have a good reason. Something sad happened, and I knew I couldn't just go on blogging like nothing had happened without writing about it first, but I didn't want to write about it. So I kept putting it off.

If you've read this blog for a while, you know that my Aunt Margie was also diagnosed with myeloma in November 2011. Margie's myeloma was aggressive and relentless. She went through a lot: Lots of different medications/chemo, a transplant, radiation, and surgeries. Finally, this past June, the doctors told her there was nothing more that could be done, and she started hospice care. She passed away from myeloma in mid-July.

It's a big loss for our family, especially for her husband, her kids, and her grandkids. I will really miss her. I promise I will write more about her someday soon, but I can't right now. I just wanted to explain why I've been away from the blog for so long.

Happier posts to follow soon, I promise!
Posted by Karen at 5:15 PM 2 comments: