Cleaning out the basement

We had to get a new water heater today (and that story is a whole blog post in itself), so I had to move a bunch of stuff out of the storage room in the basement so the Water Heater Guy had enough room to work. While he was working, I started looking through the boxes, and I found many disturbing things. 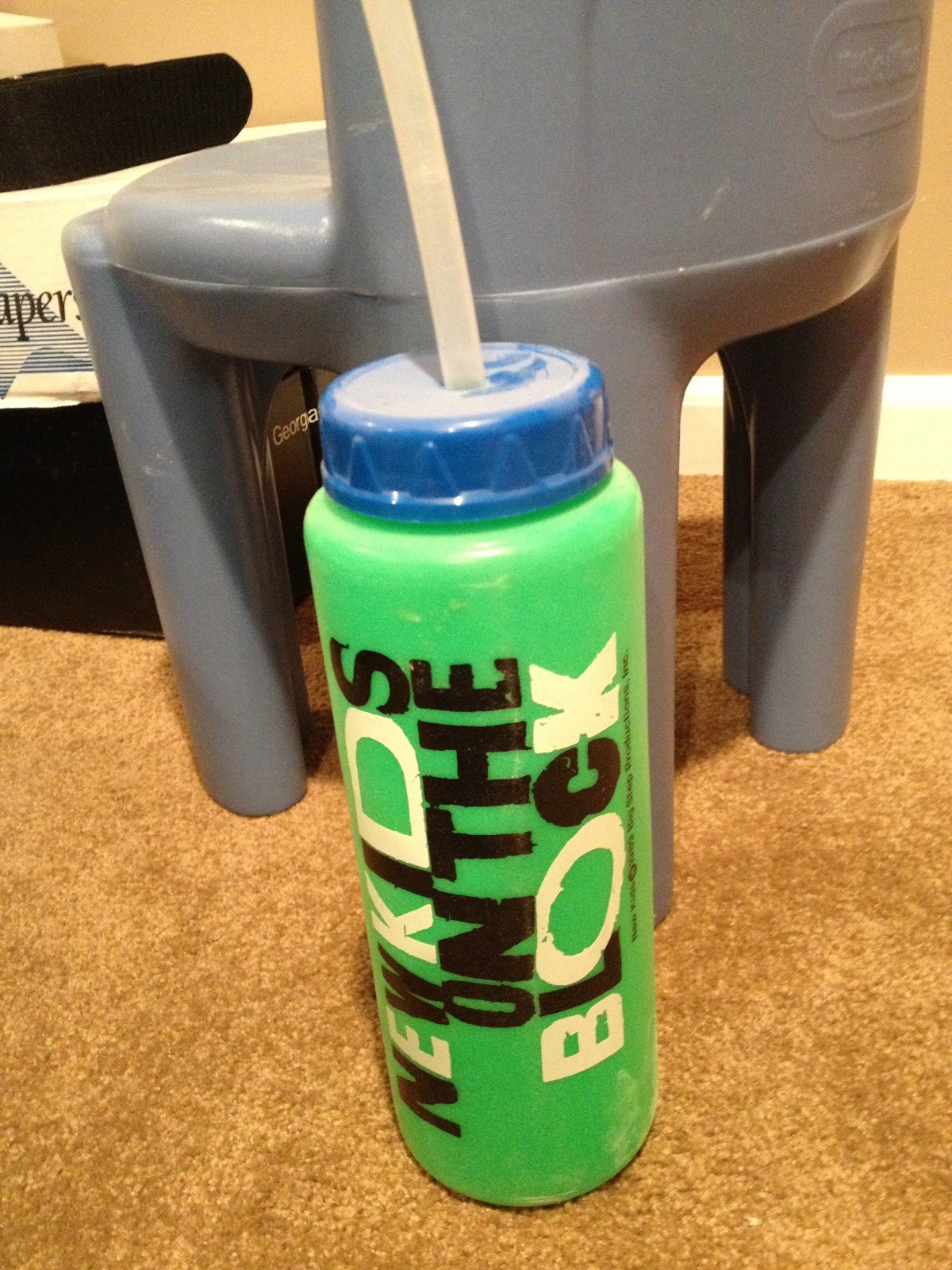 Well, that's not so disturbing. I'm totally running it through the dishwasher and taking it with me to the Y tomorrow.

But check this out: Not only did I have an NKOTB trading card collection, but it was so extensive that I stored it in a binder. A binder! I suppose this is the exact opposite of Mitt Romney's binder full of women: 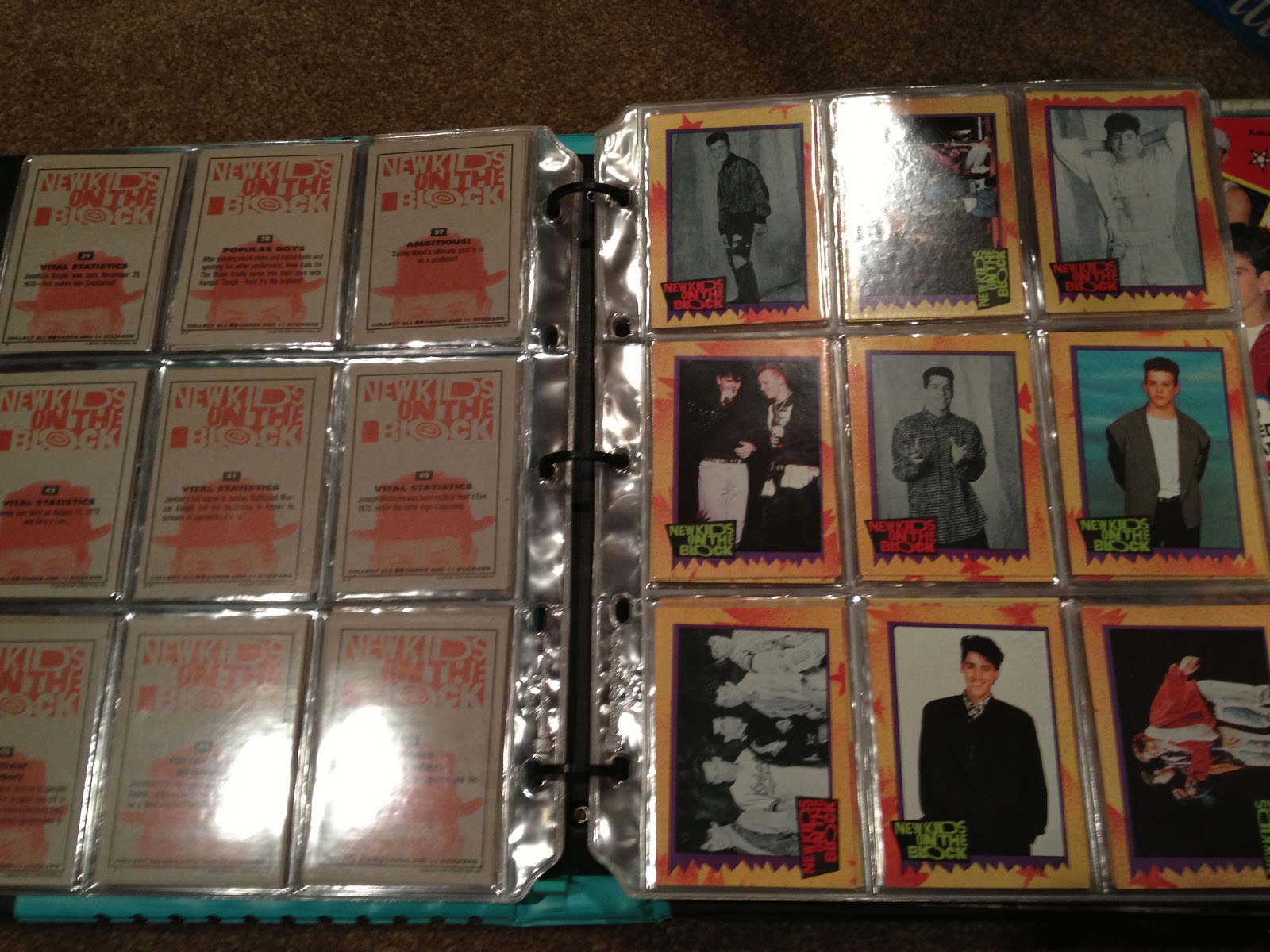 "Are you a New Kids love match?" For the last time, yes! 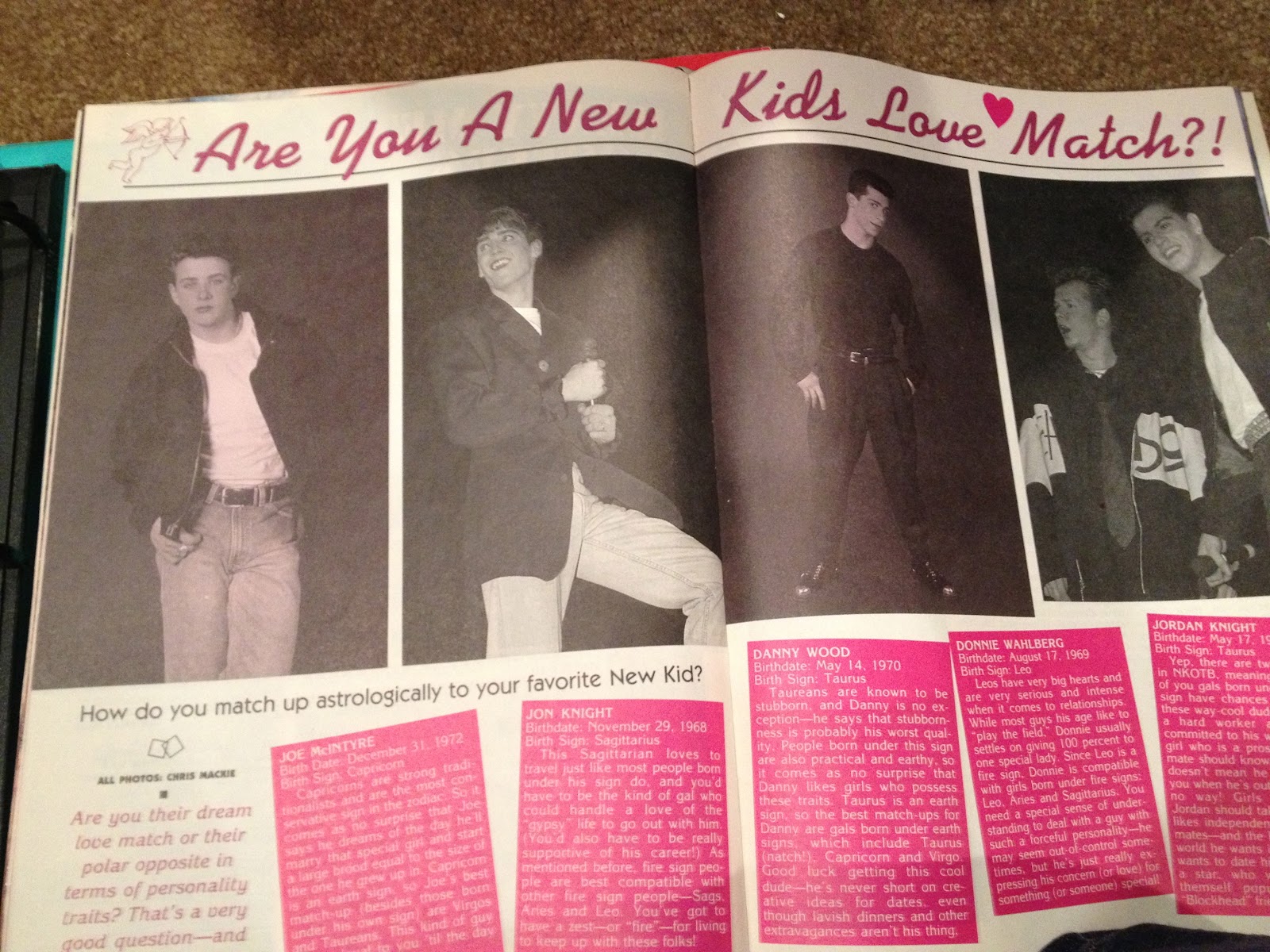 Holy crap. This is a fan letter that I typed on a typewriter to Matthew and Gunnar Nelson.

This is what it says. I left in the spelling and typing errors, just because they make me look cute:

Last night my sister and our friends went to your extemely AWESOME concert in O aha Nebraska. It didn't start until eight but we got there at three ihnthe afternoon and stood in line in the freezing wind until six thirty because we wanted to get good seats because we love you so ...... (please excuse my horrible typing skills) Ween they finally opened the doors we parctically got trampled and smushed by everybody, but we ran as fsat as we could and got seats in thefourth row!!! (Needless to say , we were excited) Your concert was totally worth the wait and nearly getting squished. My ears have been ringing for the past eighteen hours because it was so loud. But it was worth that too. Gunnar smiled at me and threw a guitar pick to my sister's friend but some girl grabbed it out of her hand (bummer) And I loved Matthews pants. :) that's a smiley face. :) :) :) Matthew is cool. Please (once again) excuse my awful typing. I rally hope that na

1. WCK, if you are reading this someday, and you go to a rock concert that makes your ears ring for 18 hours, please report your symptoms to a responsible adult or see a doctor. Don't type about it to the rock stars, no matter how awesome their pants are. Believe me, I completely understand the power of awesome pants, but your hearing comes first. If you absolutely must type about it to the rock stars, at least finish the letter and send it, because maybe they will be able to get you some help.

2. I really do think they would have excused my horrible typing skills, had I actually sent the letter, because they did seem like they were nice. Considering the fact that spell check hadn't been invented yet and my ears had been ringing for 18 hours, I think I did pretty well.

3. Now that I think about it, WCK, you will never experience the ear-ringing, because I won't allow you to go to a concert where you "parctically got trampled and smushed by everybody." So never mind.

3. The letter ends right in the middle of a sentence: "I rally hope that na ...." What was I going to tell them? What? "I rally hope that nasty girl who stole the guitar pick is involved in an ironic accident. Like, the next time she goes to a Nelson concert, a guitar pick flies off the stage and lodges itself right in her eyeball. If you can see about making that happen, I would rally appreciate it. Love, Karen P.S. Did I mention that your pants were awesome?"

And if you don't know who Matthew and Gunnar Nelson are, you obviously weren't paying attention in 1990. I mean, they were right on the cover of Loud Mouth and everything. Surely you had a subscription. 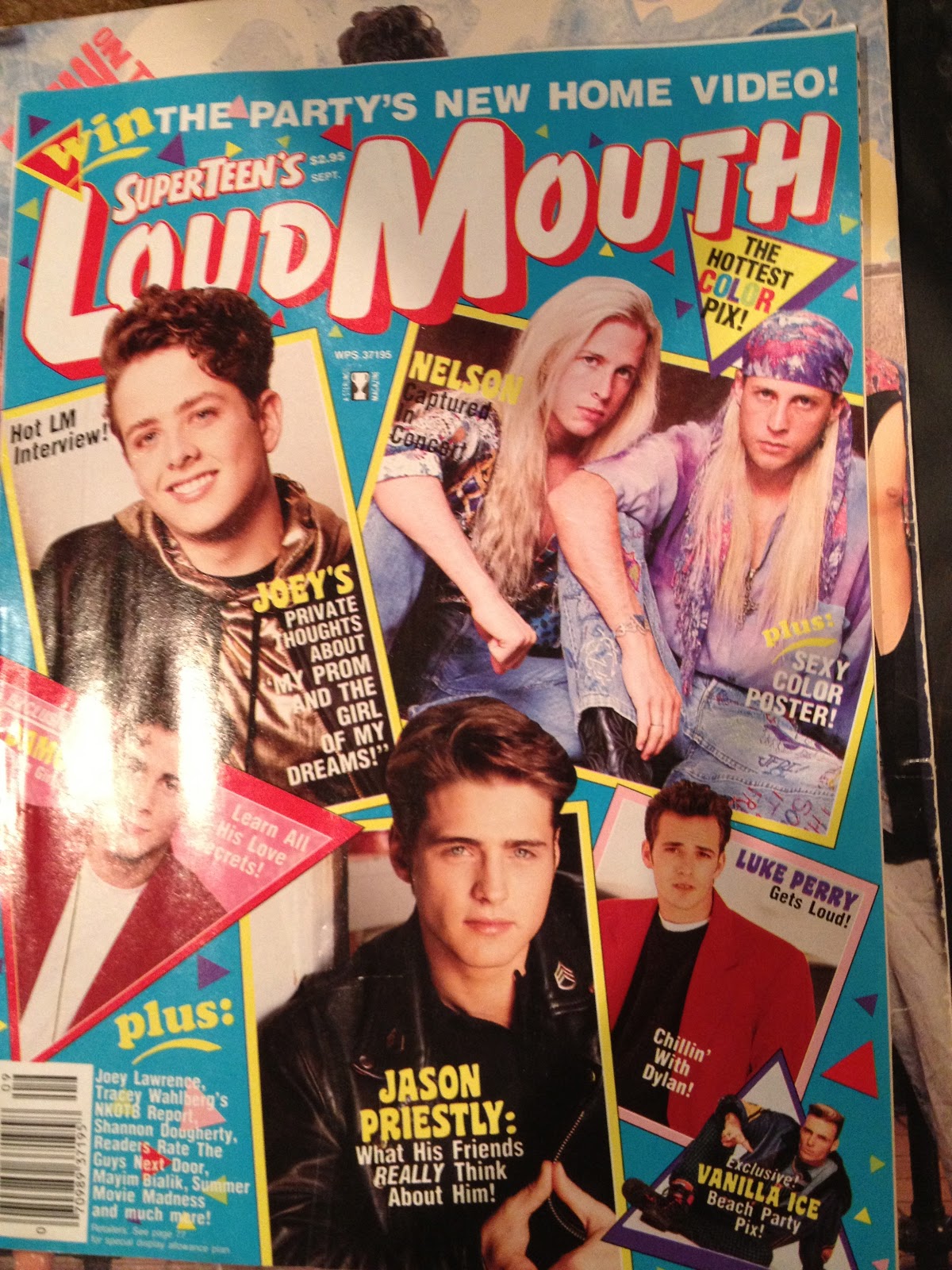 Is it wrong that I still know without checking that the one in the bandana is Matthew and the other one is Gunnar?

Now, it's very easy for me to laugh about these things because they are artifacts from many, many years ago, when I was a mere child. Then I found something that really freaked me out, because it shows that I've also been an adult for many, many years, and that's just wrong. I found ... my wedding planner: 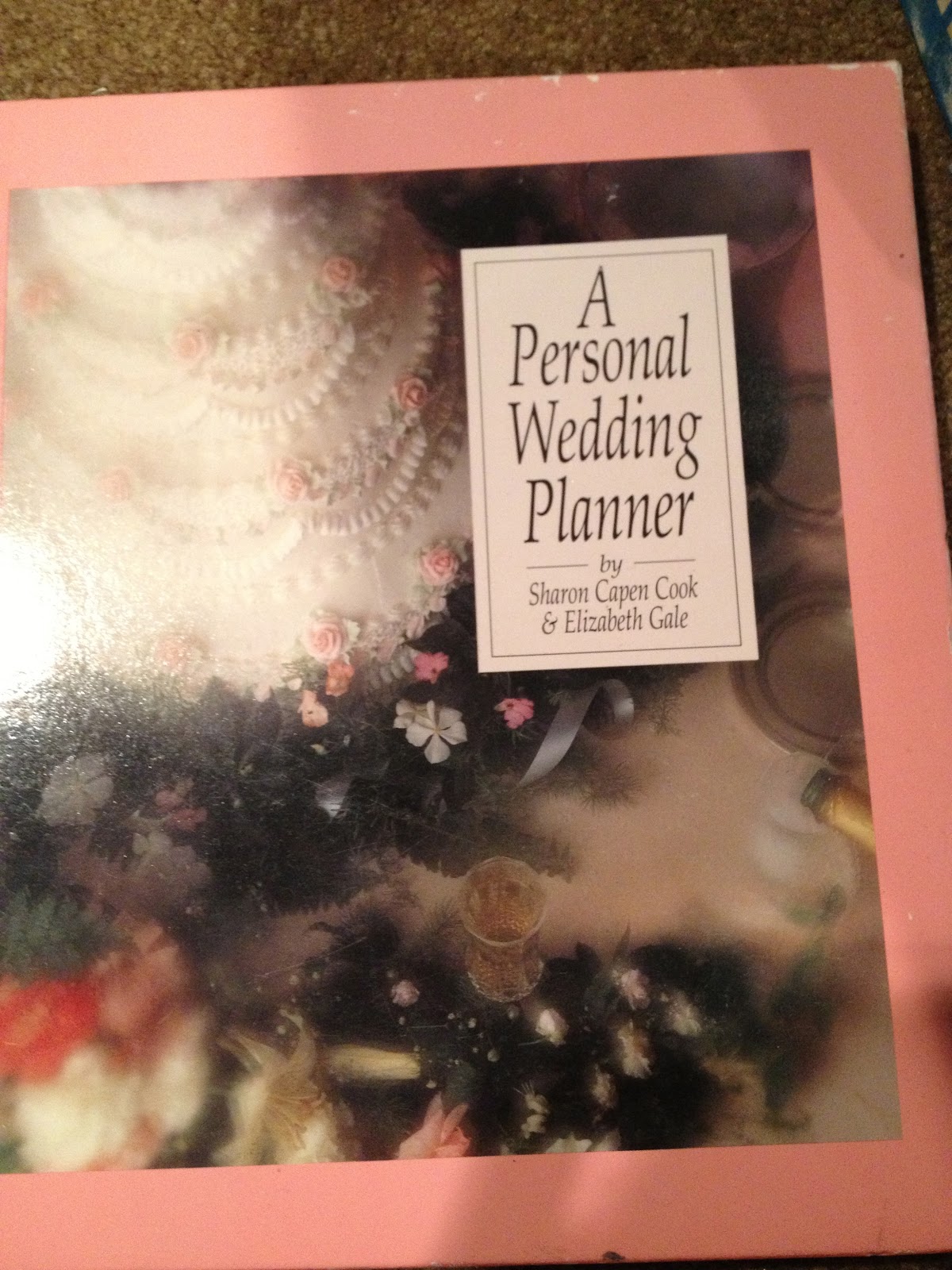 I got married in 1998 when I was 23 and (in theory) a fully grown, mature adult. I'm not very old now, right? So I haven't been (in theory) a fully grown, mature adult for that long, right? Looking through this wedding planner, though, I realized that 1998, the year that I was a grownup and got married, was so long ago that it now falls into the Stupid-Looking Era. You know what I mean. Look at photos taken five, even up to 10 years ago. Most of the fashions and hairstyles still look halfway normal; they're nothing you'd laugh at. Now look at photos taken 25 years ago or more. All of those fashions and hairstyles now look adorably old-fashioned and "classic."

Now look at photos taken 15 to 20 years ago. Everything just looks stupid.

This is always true. Back in high school, I would watch reruns of The Brady Bunch and laugh about how stupid their pants were. Flash forward to the year 2000 when wide-legged pants were suddenly cool again. I had a very hard time adapting to wide-legged pants, because I always remembered them being from the Stupid-Looking Era. It took me a while to realize that by 2000, the Stupid-Looking Era had shifted to the mid-80s, and nobody was wearing narrow pants anymore. I finally went out and bought a pair of boot-cut jeans, and then I cried to my sister that I looked like Jar-Jar Binks.*

But now I've come to realize that the Stupid-Looking Era has moved yet again, and it's moved all the way to the late '90s. I remember going out shopping a few days after we got engaged and buying this wedding planner at B. Dalton's at the mall. (I'll pause while everyone under 30 asks their parents what the words "B. Dalton's" and "mall" mean). At the time, it seemed like a perfectly fine, up-to-date, normal-looking, fashionable wedding planner. Today I opened it up and saw this: 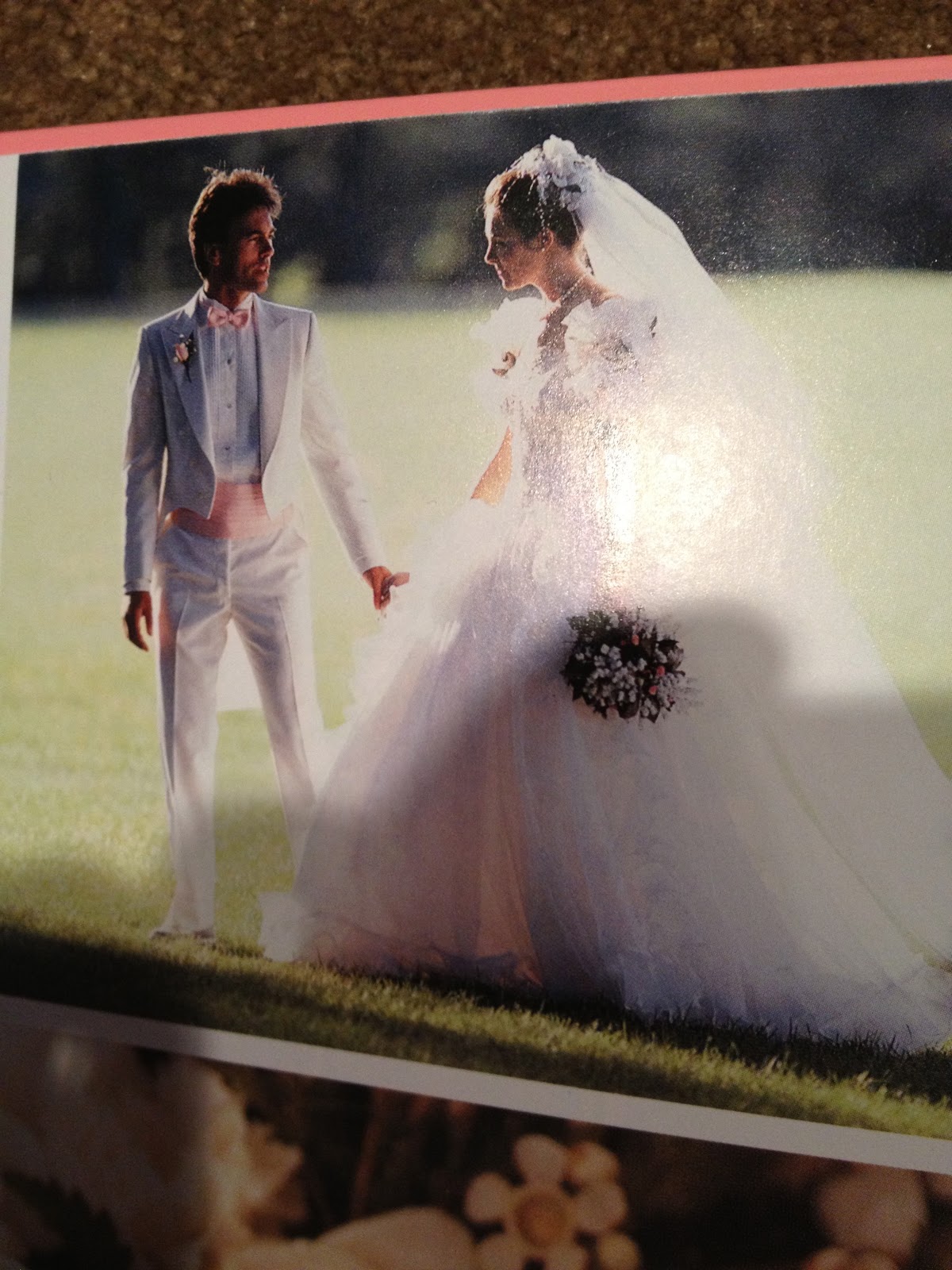 Oh, yeah. I am so old that there is a dude in a white and pink tux in my wedding planner. And that woman in the Glinda-the-Good-Witch dress doesn't even appear to be bothered by the fact that she's about to commit her life to a man in a pink and white tux. They're all, "Woo! Let's get married and then go listen to Hootie and the Blowfish and talk about Monica Lewinsky!"  And I probably saw this picture when I found the wedding planner in B. Dalton's, and I did not bat an eye.

I'll let that soak in for a moment before I reveal Bad-Perm-Big-Eyebrow Woman: 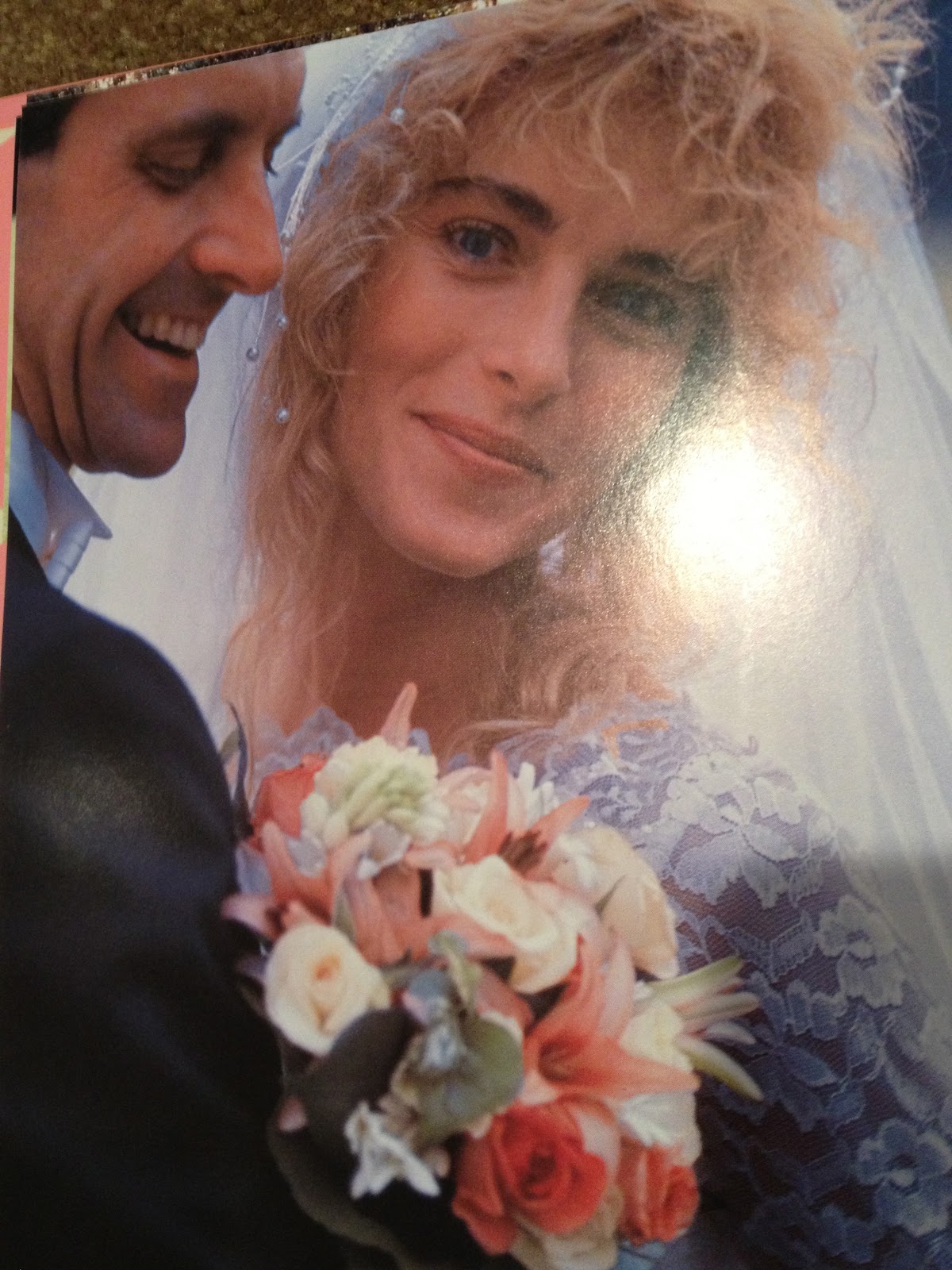 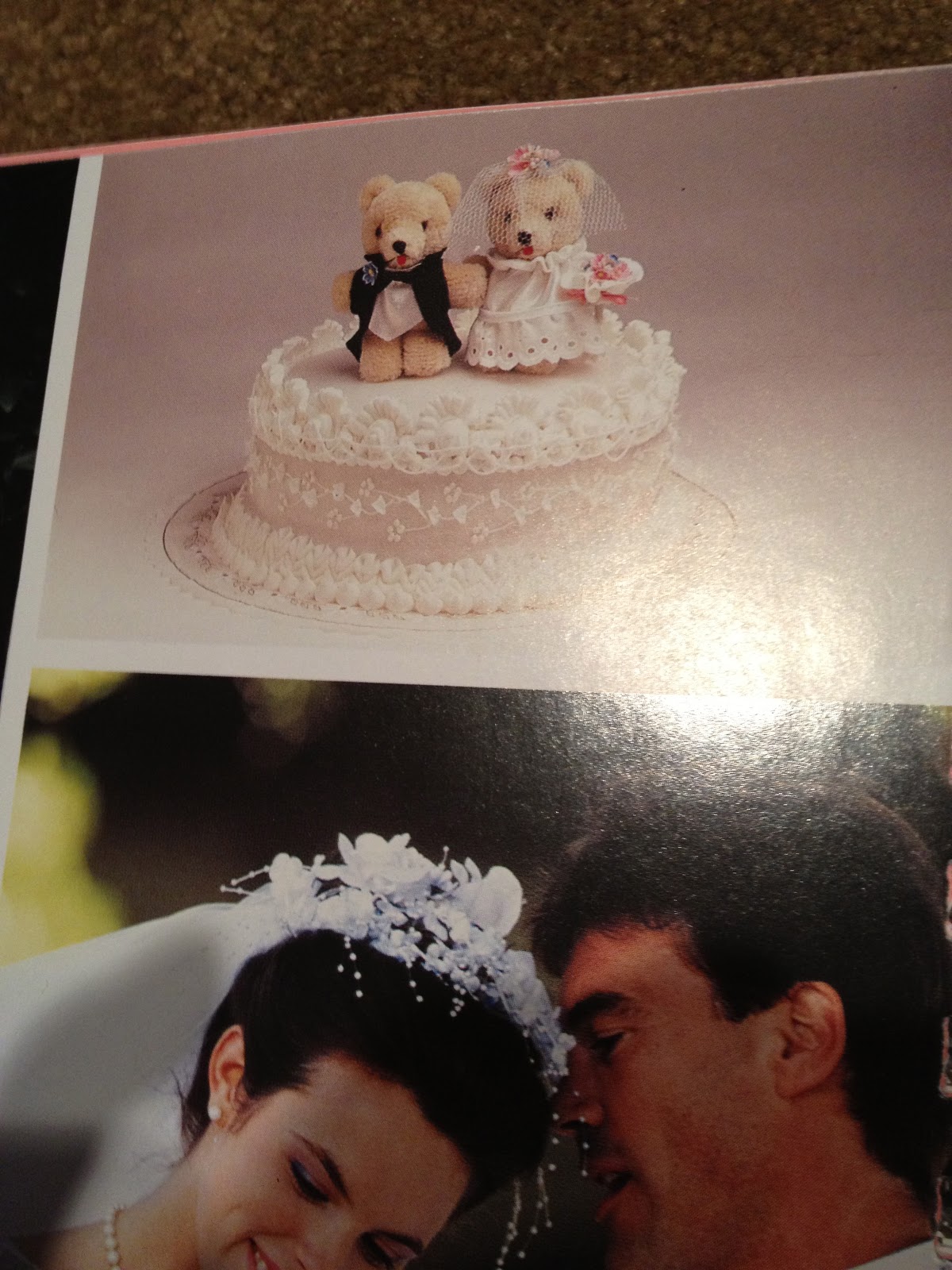 But that's not all. Right next to the wedding planner was a book about childbirth that looks even stupider. I know WCK was born just seven years ago and is still years away from her own Stupid-Looking Era, but this is a book that somebody gave to us, copyright 1993. I graduated from high school and started college in 1993. 1993 was not that long ago, right? You'd think that, until you see this photo of a feathered-hair woman in a track suit being held up by her husband, Val Kilmer: 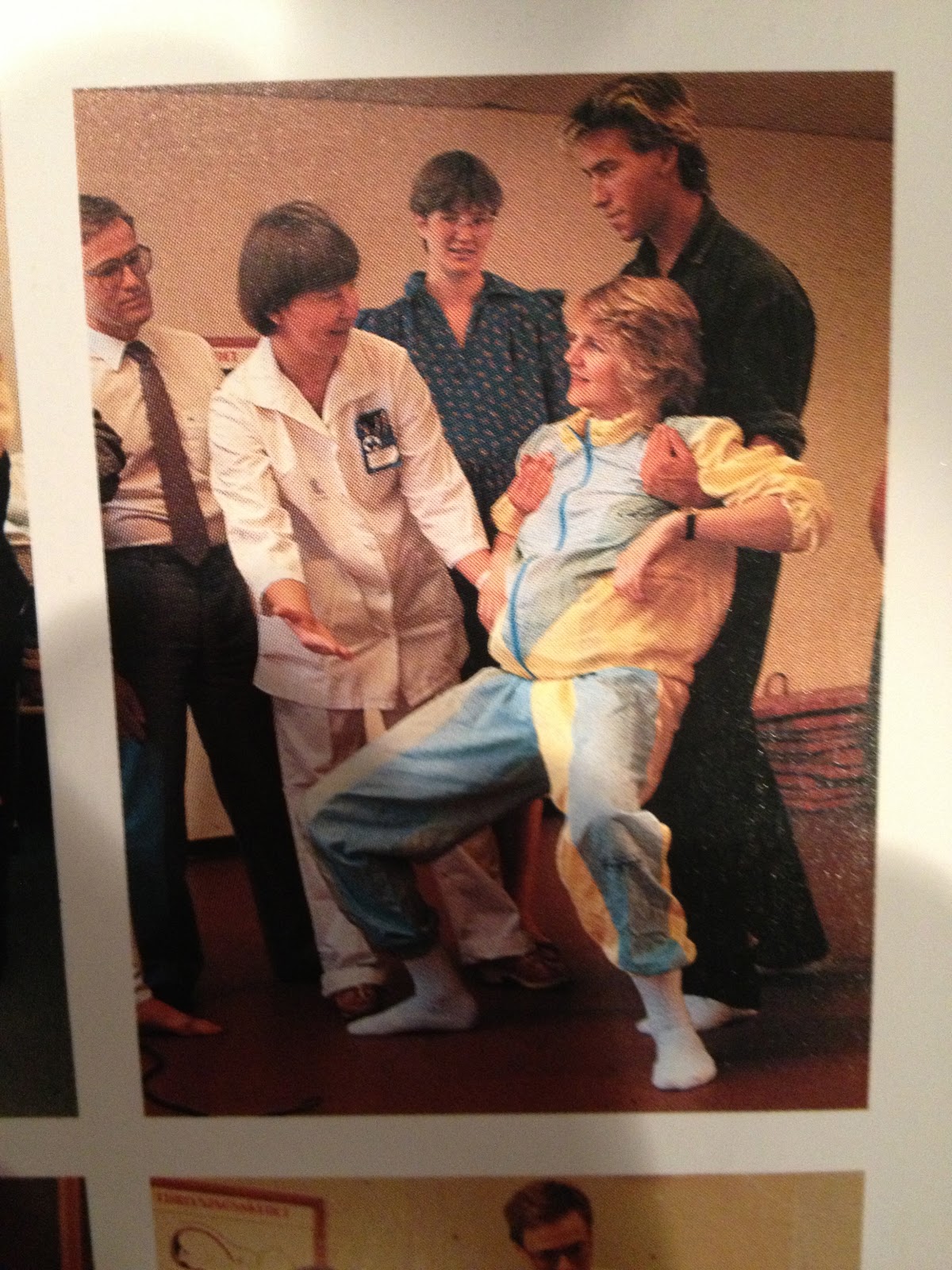 And then there's this. Is this woman holding her stomach and looking joyful? Or is she grimacing because she has to pee 42 times a day, but it's the 1990s and she has to wear overalls? 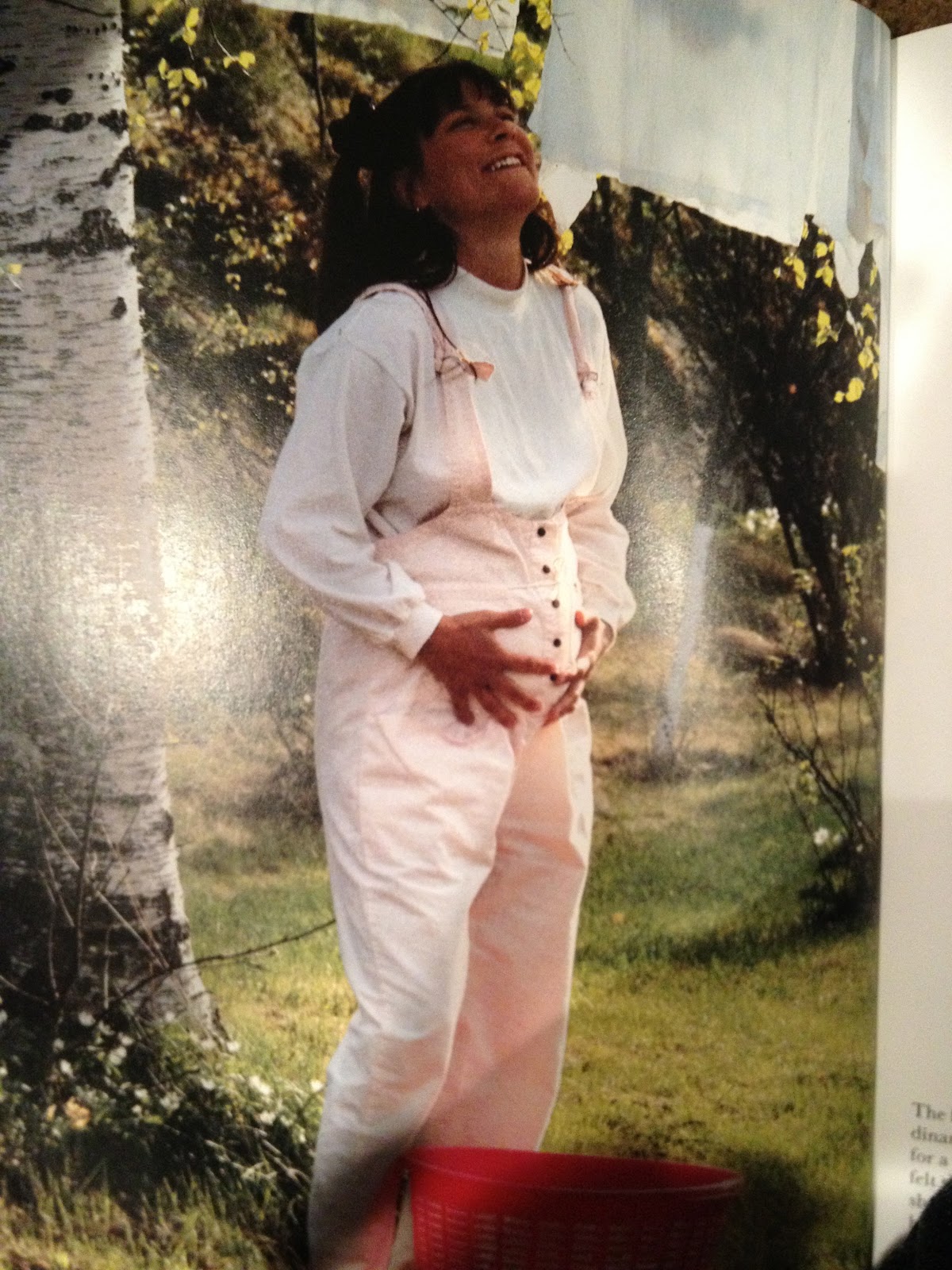 But I've saved the stupidest-looking photo for last. You should know that this was presented in the book in a completely serious, non-ironic, 1990s way. This makes me want to clean out the basement more often: 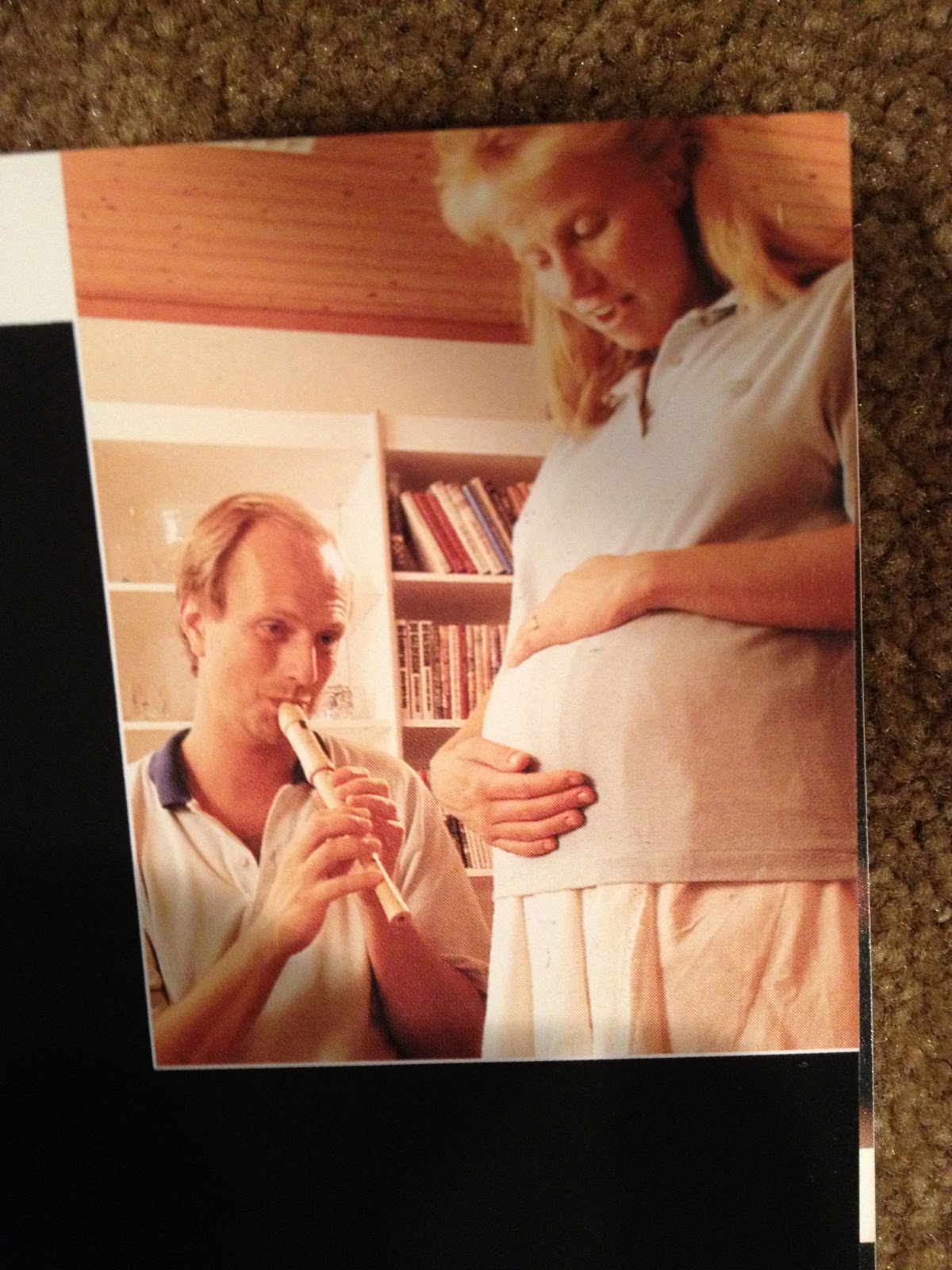 In the very first post I ever wrote for this blog, seven years ago this month, I wrote about what prompted me to start the blog in the first place:

What’s funny about cancer? Well, nothing. One day last December, however, while I was anxiously hanging around a computer lounge at the Mayo Clinic, wondering if anything would ever seem funny again, I got an e-mail from a college friend of mine who has had two heart transplants in the past few years. He told me to find humor wherever I possibly could; it would save me.

This man has had two heart transplants and still seems relatively chipper, so I believe him.

That e-mail was from my friend Brian, who died yesterday from complications from those heart transplants. He was only 39. I met him on my first day of college in 1993. I had a scholarship that required me to write for the school newspaper, and he was the editor of the paper. I'm sure my other college friends would agree that he was probably one of the best editors that paper has ever had. If you wrote/designed something that really sucked, he would not hesitate to tell you that the thing you just wrote/designed really sucked. But then he would help you make it better.

He was wonderfully funny, he knew everything there is to know about movies and pop culture, and he cooked me chicken stir-fry on my nineteenth birthday. Once we went to a journalism conference in New York City and we spotted Woody Allen in FAO Schwarz. I thought Brian was going to pass out. We pretended we were looking at Barbie dolls while we stalked Woody Allen.

Brian went on to a great career in journalism. I will be forever grateful to that advice that he gave me in 2005 --- advice I try to follow every day. I will miss you, Brian.

I thought I'd post this video, because he really liked singing and dancing to this song in college. It seems fitting. I can't help but think he'd get a kick out of the cheesy roller-skating routine: