Grow your own candy canes

This morning WCK woke up to find:

1. A glass filled with white flour
2. Ralph the Elf resting in an open bag of peppermints
3. Several peppermints scattered around the glass
4. A note reading, "Dear WCK, Plant the peppermints in the flour and see if they grow. Love, Ralph."

I had to edit the photo a little to hide WCK's true identity: 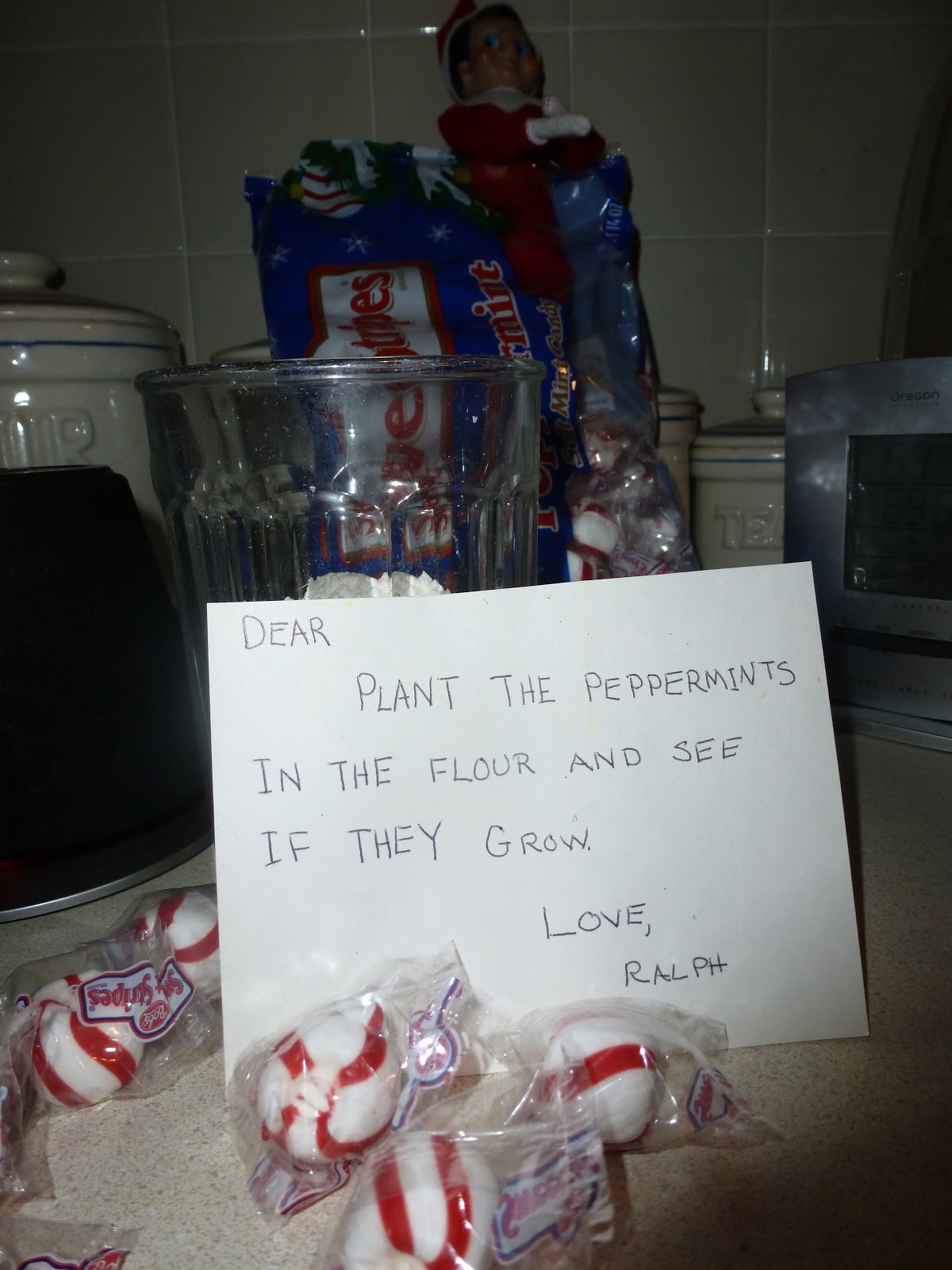 WCK got right to work, very seriously planting four of the peppermints very carefully in the flour. I told her she could plant more, but she wanted them to have enough space to grow. She asked if she should water them; I said no.

This afternoon, WCK and I went to the Nutcracker ballet downtown. Jay stayed home. When we returned from the ballet, we were shocked to find .... 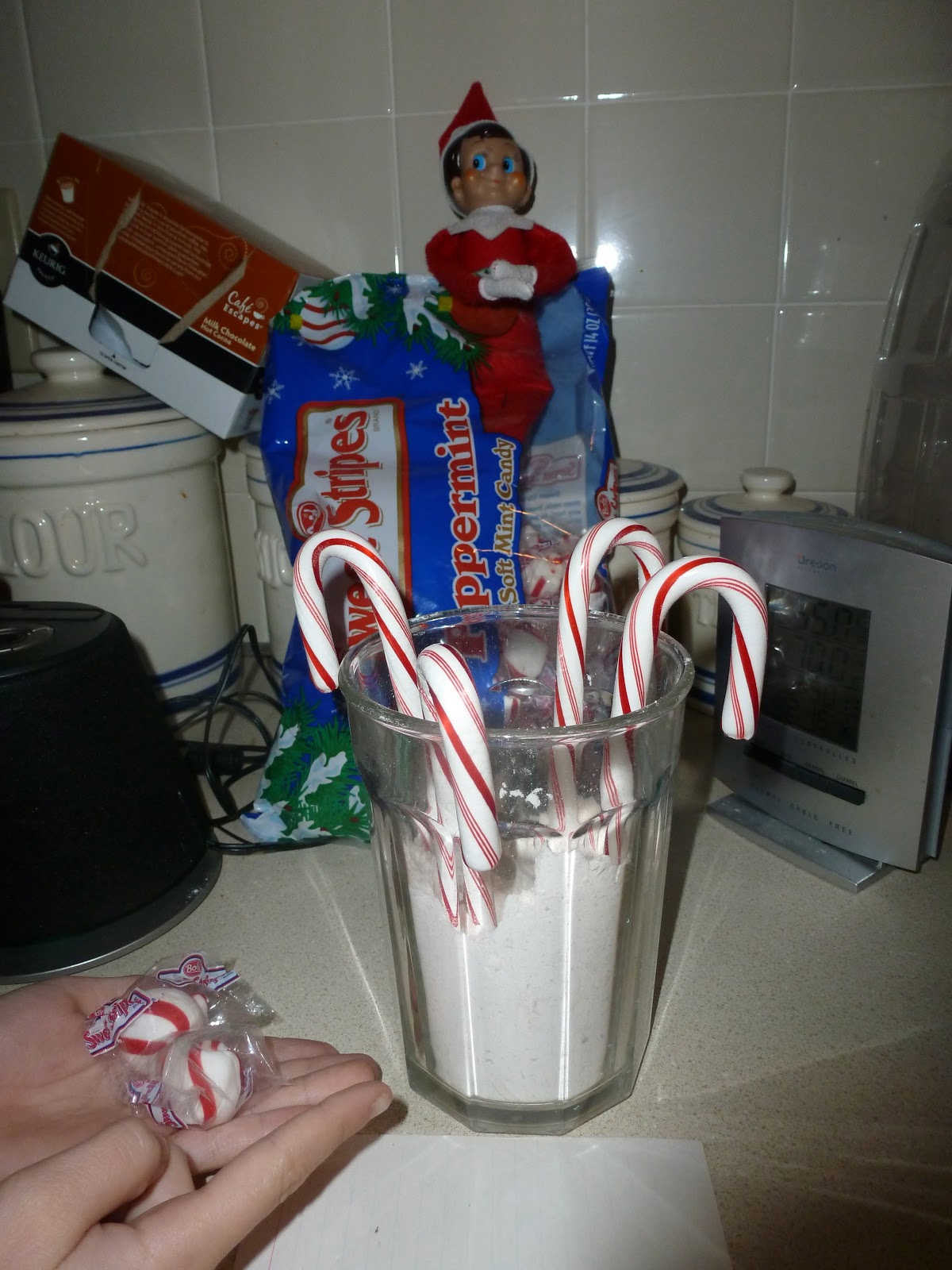 Candy canes had sprouted in the flour!

That's amazing. WCK now fully believes that candy canes grow from peppermint candy seeds. While I do enjoy the magic and whimsy, I'm also imaging the angry phone call from college when she flunks Botany 101.
Posted by Karen at 8:46 PM 3 comments:

Garland, our cat, is going to be 16 in a few months, which is pretty old for a cat. She's always eaten dry cat food, but our vet recently suggested offering her some canned food "just to see if she likes it." The vet's theory is that it's good for older cats to have canned food, because it's easier to chew and helps keep the cats hydrated, and if they ever need medicine, it's easy to sneak in there.

I dutifully went out and bought the canned food, and now I'm finding it hilarious that we had to "see if she likes it." Saying Garland loves the canned food is not strong enough of a statement. The canned food is the best thing to ever happen to Garland. Were it legal, Garland would marry the canned food and settle down and give birth to a litter of baby canned food. We are going to have to send her to a canned food rehabilitation clinic, but I know she'll fall off the wagon the second she gets out.

Garland gets the canned food every morning when I wake up. My alarm goes off at 6:15, so Garland starts walking on my face and meowing and precisely 6:14 every morning. You think I exaggerate. Today, Jay woke up around 5 a.m. to go running. I woke up for a minute and then fell back asleep. Before I knew it, Garland was walking on my face and meowing. I rolled over and looked at the clock, and ... the electricity had gone out! Panicked, I ran to my iPhone to check the time and saw that it was exactly .... 6:14.

I want to call her a hero cat, but I don't think I can. While I think a dog would have sensed somehow that the electricity was out and heroically woken his/her owner, I know Garland was only thinking of the food. Thankfully, she still received her food on time, which is the important thing here.
Posted by Karen at 5:26 PM 1 comment:

Calgon, take me away!

I'm continuing my quest to have a more creative elf, because I'm still feeling like an Elf Slacker. From what I've been seeing on Pinterest and Facebook, you're pretty much required to give your elf a bath in a bowl of marshmallows. Those of you who don't see 100 Elf on the Shelf photos posted by your Facebook friends each day might think this is pretty creative; however, the bath-in-marshmallows-setup is pretty much Basic Elf for Beginners 101. (One of my friends handmade her elf a sweater. A sweater!) I'm not to the sweater level yet, but think I managed to pull off the bathtub pose: 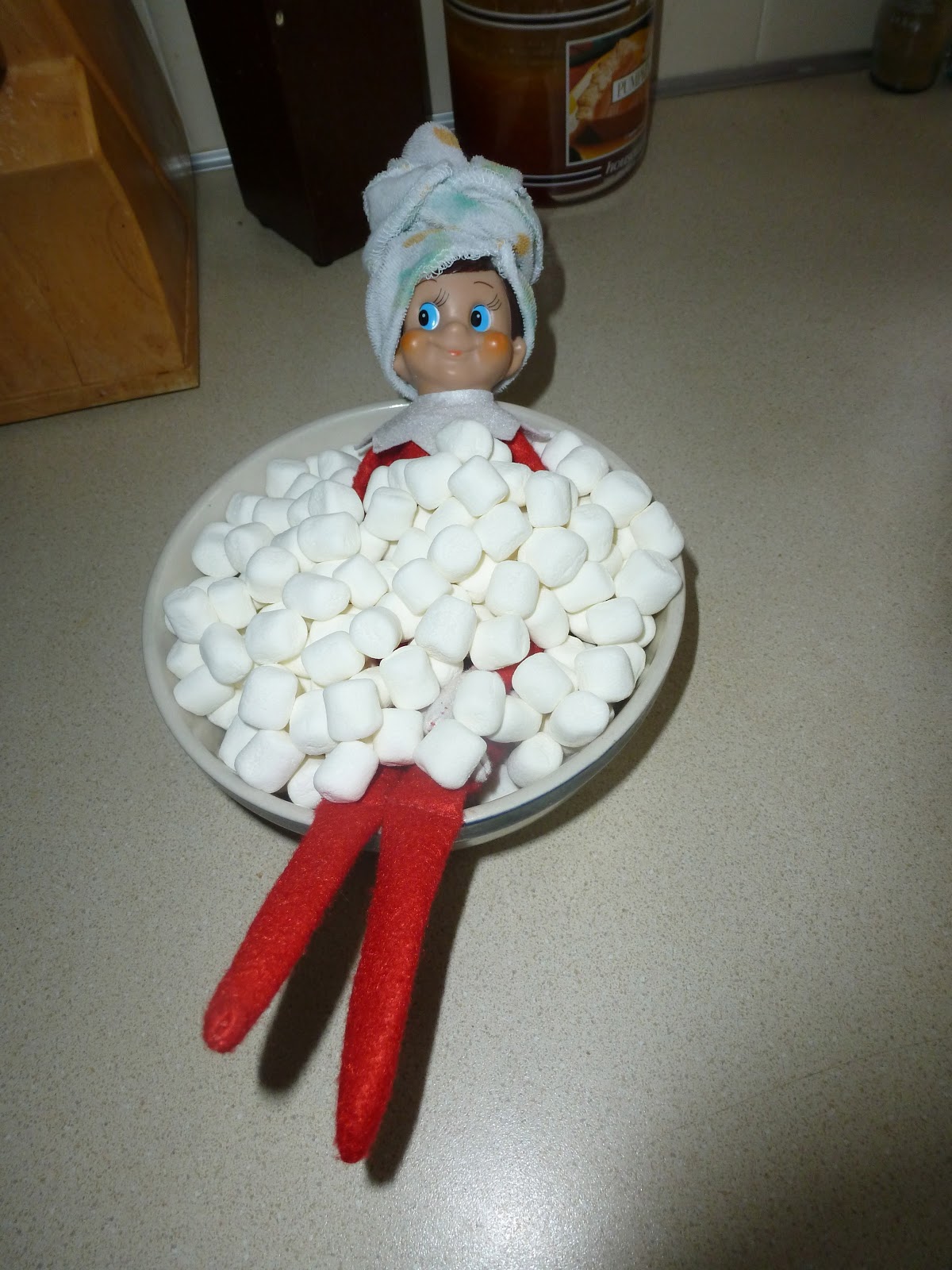 As I was looking at my handiwork, I started to get a little nervous. Was WCK going to believe this? It's one thing to believe the little elf is flying to the North Pole and then flying back to a different spot in the house each night. It's a little bit of a stretch to believe that he found himself a bowl, opened the bag of marshmallows, settled himself into a bath, thought, "Wait a minute! My hair is getting wet!", went upstairs and wrapped a washcloth around his head, and returned to his marshmallow bath, where he would soak comfortably for 24 hours.

Surely, she was going to see through this. Surely, it would all come together and she would accuse me of manipulating the elf. Surely, our days of Elf Fun are over.

No. As Ferris Bueller once said, she bought it.

All right. I guess I'd better start working on that sweater.

ME: Daddy and I got that the year we got married, so it wasn't before I was born. I was 23.

WCK: I guess people got married young way back then because they only lived to be, like, 50.
Posted by Karen at 10:18 PM No comments: