On the last day of school, WCK brought home the journal she'd been writing/drawing in every day. Here is the best entry, or to look at it another way, the worst entry: 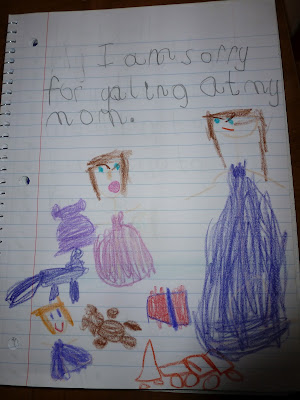 It says, "I am sorry for yelling at my mom." I recognize this scene. The floor is covered with toys, I have told her to pick up the toys, and her mouth is a big "O" because she's yelling that she does not want to pick up the toys.

I cannot tell you how grateful I am that I am not the one with the yelling "O" mouth in this drawing. Not that WCK would know what a yelling mouth looks like on me, because I am a perfect mother who never yells during the always cheerful, Mary-Poppins-like toy-pickup process.*

Still, look at my angry eyebrows! Obviously, I am extra, extra mad that there are toys on the ground because we're both wearing formal strapless ball gowns and we must have someplace to go. I must be saying, "Pick up your toys! We're going to be late for the barbecue at Twelve Oaks Plantation!" I usually never get this mad on a regular day. **

My niece (I shall call her Little Red Haired Girl) came to stay with us earlier this summer. LRHG and WCK are only four months apart and they love hanging out together. I was a little nervous about having two kids to take care of, but it turned out to be easier than I thought. I took them to Worlds of Fun, an exhibit about the Titanic, and the science museum. We did crafts. The kids ran through the sprinkler and ate popsicles. Everything was great.

Then on Saturday morning I went my Body Pump class and left Jay in charge. When I returned an hour  later, I found my husband had become a broken shell of a man. He had to go lie down.

Later, when Jay could speak again, he and WCK helped me piece the story together.

LRHG had brought along two of her favorite "toys": Two unopened cans of pop. One was a Squirt; the other was Dr Pepper. She doesn't drink them. She just likes to carry them around unopened. Why? Some things just seem cool when you are six.

Jay decided to go outside and work in the yard, and the kids decided it would be a really good idea to try to put dents in the cans of pop. Why? Again, some things just seem cool when you are six and seven.

How were they going to dent the cans? What a ridiculous question! If you're going to put a dent in a full can of pop, of course you are going to do it by beating it against a concrete goose: 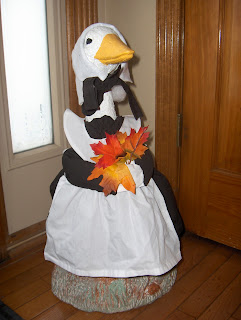 After a few good whacks against the side of the goose, the can of Squirt exploded. The kids became hysterical, and LRHG ran outside to get Uncle Jay, who was working in the yard and didn't have his hearing aids in. He had no idea why LRHG was so hysterical and assumed something catastrophic (well, more catastrophic than a beloved can of Squirt exploding) had happened. I'm guessing, though, that being able to hear the real explanation probably would not have cleared things up.

Jay walked into the house and found puddles of pop all over the entryway, with WCK calmly wiping it up with a paper towel. Of course he asked, "What happened????" and of course WCK answered, "Nothing."

And that's when Uncle Jay had to go lie down.


When my sister returned to pick up LRHG, she decided it would be for the best if the can of Dr Pepper got "lost" at our house and they "accidentally" "forgot" to take it home. Later, after they were gone, WCK discovered the Dr Pepper's hiding place.

"Oh, no!" I said. "LRHG accidentally forgot her Dr Pepper! By accident!"

WCK wanted to see what would happen if we shook up the Dr Pepper and opened it, and I said we could, but out in the driveway this time. We went outside and watched the explosion, and then WCK asked if she could try some. I said she could have one sip, because the thought of my child having large amounts caffeine scares the daylights out of me. WCK took a sip and her eyes lit up. Apparently Dr Pepper is the nectar of the gods!


I said, sorry, no more Dr Pepper, and we poured the rest of the can onto the driveway. I started to go back into the house, turned around, and saw my child licking Dr Pepper off of the driveway.

WCK asked why people get headaches when they eat ice cream. I explained that when you eat something cold really fast, the blood vessels in your head suddenly get really cold and clench up, blah blah blah. (I checked this later on Wikipedia, and it turns out I was pretty much right.)

WCK said, "Oh, kind of like when you're all warm and cozy and then a snowman suddenly jumps on top of you?"

I haven't blogged in a while because a sad thing happened. I knew I needed to blog about the sad thing, but blogging about it would mean that it really happened, so I didn't want to. But I guess I have to.

A few weeks ago, fellow myeloma blogger Paula Kilgallon passed away from her disease. I'd never met her in person -- she lived in the UK -- but I felt like I knew her through her blog and her comments on mine. She liked to make fun of me for my NKOTB obsession, which I appreciated, because, well, somebody had to do it. She was sweet and funny and only 42 years old, and she was the creator of the adorable Myeloma Buddies: 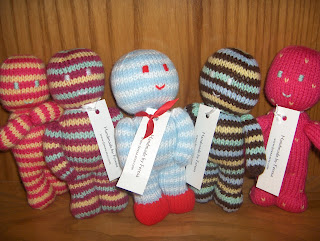 I think probably every myeloma patient I've "met" online ordered at least one of these buddies for their kids or grandkids. Paula made them by hand, and the proceeds went toward myeloma research. When I ordered four of them for WCK, my nieces and nephew, Paula added a free "bonus buddy" just for me. It was a Dorothy Buddy with ruby slippers. I couldn't believe it. Here's a photo of Dorothy Buddy with some deep-dish pizza when I went to the ASCO Conference in Chicago: 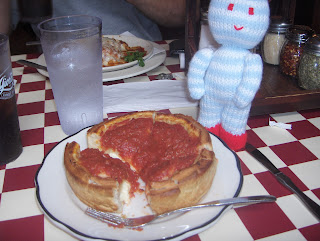 Anyway, my Dorothy Buddy has always had a home on my nightstand, right next to my bed. I'll think of Paula every time I look at DB. I know all the other myeloma buddies who have found homes all over the world will continue to make their "owners" think of Paula on a regular basis, too. She will be missed.
Posted by Karen at 5:49 PM 3 comments: