I love going to movie theaters, but WCK insists that all movies are "scary." The only movies she'll agree to see in movie theaters are nature documentaries. When I saw that Disney had released a documentary called "African Cats", I knew this might be my only chance this year to actually see the inside of a theater and eat some popcorn. On the Monday of Easter break, I threw WCK in the car, and we went.

Now, because it was a Disney movie and rated G, I expected that it would be cute, lighthearted movie about baby lions frolicking happily on the African savanna. No. "African Cats" was the SCARIEST MOVIE EVER.

Of course, WCK, who is too scared to watch "The Tinkerbell Movie", didn't find "African Cats" scary at all. Because this is the way my child is.

Ever since we got home from the movie, we have had to spend a lot of time acting out "African Cats". Usually, I am stuck being the zebra or wildebeest while WCK gets to be the lion or cheetah. I crawl cluelessly around my bedroom, pretending to eat grass, while WCK stalks me from the end of the hallway. Then she crawls down the hallway at lightning speed, pounces, eats me, and crawls away.

Other times, we are both lions from rival prides. We both crawl to the center of the hallway and yell at each other. "You stay away from my pride!!!" "No, YOU stay away from MY pride!!" "Well, my pride has 10 cute baby lions!" "Well, MY pride has ONE MILLION CUTE BABY LIONS!!!" If we're lucky, Garland will wander by and play the part of the actual pride.

After we yelled at each other yesterday, we decided to team up and go hunting for some prey together. We were able to scrape up a sock monkey and a stuffed triceratops for our dinner. We also found some baby dolls, but WCK decided we should not eat the human babies. We should dress them up in cute clothes, put them in strollers, and walk them around Africa. Then we should get distracted and start playing with Barbies.

Our dramatic interpretation of "African Cats" often does not follow the movie very closely.

Call me a terrible mother, but I'm extremely grateful that the weather is nice today and we can go to the park after school instead of playing another round of "African Cats." The zebra is worn out.
Posted by Karen at 8:44 AM 6 comments:

Jay found this race online and signed me up for it. I don't know why: 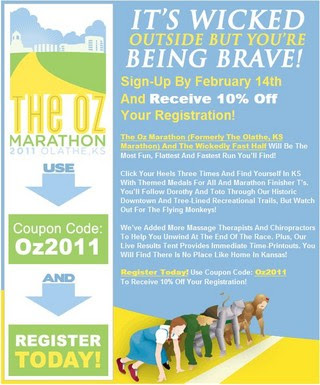 I ran the "Dorothy Dash 5k", which was way, way, way easier than running over the bridge last week. The weather was cold and the course was flat, and I remained friends with Bon Jovi the whole way. Oddly, I only improved my time from last week by about 30 seconds, but I had a much better time this time. I even remembered to smile when I saw a race photographer.

WCK looked at the above picture and pointed out that the Scarecrow probably wouldn't do very well in a marathon, because he'd fall down. I have to agree, although I think he'd do much better than the Tin Man, who has no business running a race. A) He has no muscle flexibility, and B) the second he got sweaty, he'd just rust. Maybe the Munchkins set up oil stands around the course, though. I picture the Tin Man running by, grabbing a tiny cup of oil and pouring it on himself. Still, I think Dorothy could kick all their butts in a race, provided she had the right shoes.
Posted by Karen at 9:08 AM 4 comments:

I haven't blogged about it lately, but I've continued to run ever since I trained for that really cold 5k back in November. I ran on the treadmill all winter, and now that the weather is nice I run at a local park. I've been able to run longer and longer distances; I've had a couple of runs now where I've run about six miles without stopping, which amazes even me. I'm not really sure how I do it, even while I'm doing it. It's like my brain separates from my body, and my body keeps on running while my brain is going, "What the HECK, body? What the HECK?"

The whole six-mile thing made me get a little bit cocky, so when I signed up for another 5k, I thought it was going to be a breeze. I thought I'd sail through to the end and then say, "Oh, is that it? Isn't there any MORE to this cute little race? HA HA HA!"

Well, obviously, the 5k heard me trash-talking it behind its back and decided to kick my butt.

The first half of the race, I did really well. Then we had to turn around and run the other direction, and I discovered the reason I'd done so well during the first half was because I had a 100-mile-an-hour wind at my back, and now I was running directly into said 100-mile-an-hour wind. (OK, so it wasn't 100 miles an hour, but it was at least ninety-nine miles an hour.) Then we had to run back over this bridge in downtown Kansas City: 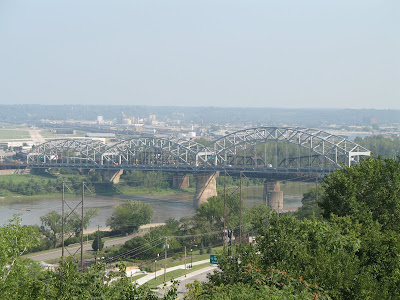 Now, running over the bridge during the first half of the race was fine. The bridge seemed like this: 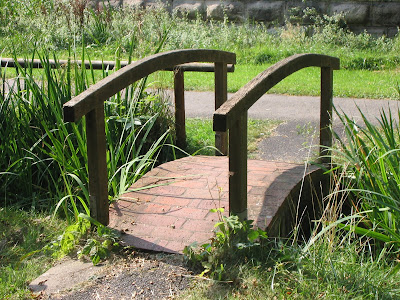 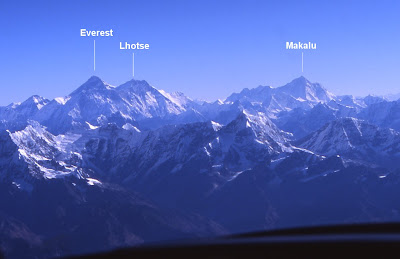 Plus, did I mention it was, like, 80 degrees at nine o'clock in the morning?

So, there I was at the top of The Biggest Bridge in the World, trying not to cry/fall down/throw up, when an official race photographer took my picture. In the photo, I look really mean, like I'm about to grab his camera and throw it over the edge of the bridge. I might have done it, too, if I hadn't been focusing all of my energy on trying not to cry/fall down/throw up.

I had one last resort: My iPod lets me select an emergency "Power Song". If you get into trouble while running, you simply hit the "Power Song" button, and your favorite song will -- in theory -- help you get through the race. Mine is "Bad Medicine" by Bon Jovi, but it turned out that not even that could help me. Now my brain was going, "OK, don't cry, don't fall down, don't throw up, and SHUT UP, BON JOVI!! SHUUUUUUUUUUUUUT UP!!"

See? The bridge did me in. I was not myself.

But I finished the race eventually, and Jay and WCK were at the finish line with a big sign that said, "Run, Momma, Run!" I got twelfth place in my age group, and I didn't die. Bon Jovi and I made up a few days later, which is a good thing, because I'm running another 5k this Saturday. I'm sure THIS time it will be really, really, really easy, though. Right?

Don't tell the race I've been trash-talking it behind its back.
Posted by Karen at 11:10 AM 2 comments:

Good news today! My M-spike went down again a little bit to 2.5. All of my other numbers are great. Let me haul out the nice, patriotic photo of Bon Jovi in a t-shirt: 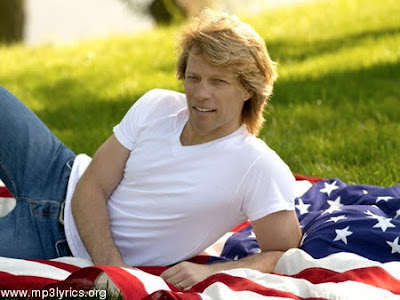 I made an appointment for a checkup at the Mayo Clinic in June. Today I got my confirmation letter and schedule in the mail. All of it looked fine, until I saw a rather ominous line in the letter:

"One or more specimen containers with instructions will be mailed to you under separate cover."

Justin Bieber, and other scary things

This is the first year that WCK really got into the spirit of April Fools Day. Here is just a tiny excerpt of what the drive home from school sounded like:

WCK: Mommy, Justin Bieber is behind you!!!!
ME: Whaaaaaat?
WCK: April Fools! HAHAHAHAHAHAHA!

You'll notice that I didn't have to fake my fear on that last one.
Posted by Karen at 9:44 PM 1 comment: