Yesterday I did a couple of nice things for WCK. First, I told her that I'd signed her up for an actual paleontological dig at a woolly mammoth fossil site that we'll visit during our summer vacation in South Dakota. (OK, so it's a one-hour program for kids where they get to sit in the dirt and pretend to dig for bones, but it sounds really impressive.)

She thought that was the most exciting thing to happen all day, until she found out about the other nice thing I'd done: I bought her some new crayons. New crayons are really exciting. They have nice pointy tips and everything. After the shock of the new crayons wore off, she composed a song for me:

"This is the Mom Song!
Because Mom is great!
Mom is better than chocolate cake!"

I'd better save this to show her when she's 15 and thinks everything I do is lame.
Posted by Karen at 8:23 PM 1 comment:

One of the reasons I wasn't blogging regularly lately is that my book club was reading The Hunger Games by Suzanne Collins. Those of you who've read it know that you can't just stop with the first book; you must immediately go on to read the other two books, at the expense of everything else in your life. At one point, I pretty much forgot I had a child. 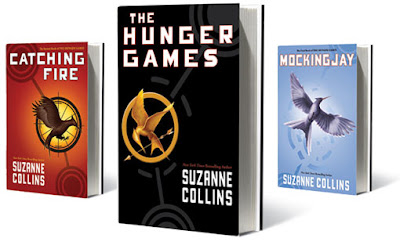 But I just finished up the final book last night, so I can have my life back. It turns out that I actually do have a child, a husband, a cat, and a fish. They're all still alive, but I'm not sure how.

Now I'm feeling a sense of power over anyone else who hasn't finished the third book yet. I could probably get them to do anything I say simply by threatening to reveal the ending. "Come over and clean out my closets, or I'll tell you how Mockingjay ends! HAHAHAHA!" I'm so evil. I could be president of Panem.
Posted by Karen at 5:25 PM 2 comments:

As you might recall, we had a pet betta fish about a year ago. His name was Jimmy John. He lived for two glorious months until I found him face-down in his gravel one morning just before Easter. We wrapped him in a paper-towel shroud and buried him in the yard. So great was WCK's grieving that she waited, oh, a good five or ten minutes before asking, "Can we get another fish now?" all day, every day for nearly a year.

I finally gave in a couple of weeks ago. We got a new betta fish named Sam (Sam isn't as good of a name as Jimmy John, but then, what is?). I had a very specific strategy in adopting Sam in early March: I figured that, with our track record, he'd pass away before we go away on our summer vacation, thus eliminating the need for us to find a fish-sitter. I'm lazy that way.

Of course, I would hate if Sam died right away. I'm lazy, but I'm not evil. I realized that Sam hit an important milestone over the weekend. The teenage kid in the fish section at PetSmart told me that all fish come with a 14-day guarantee. We've now had Sam so long that if he dies now, we won't get our money back. Keep up the great work, Sam!
Posted by Karen at 1:16 PM 4 comments:

We've been dealing with WCK's fear of "monsters" at bedtime for a long time. Every night, I get out a spray bottle filled with a tiny amount of "scary spray". The spray contains a secret ingredient that only monsters can smell, and they find the smell revolting so they stay away. (Secret ingredient = tap water) We spray the spray over all of the common monster hiding places: the closet, under the bed, etc., but WCK still believes the monsters will get past the spray somehow. Perhaps they have gas masks. I'm not sure.

So then I remind her that if any monster tries to get into the house, I will kick it in the butt. This worked well for a while, but then WCK started finding loopholes. "What if it's Jabba the Hutt? He doesn't have a butt!" and so on.

Finally, last week, in exasperation, I told her that if she could bring me proof of an actual, live monster in her room, I would pay her five thousand dollars.

For a while, she was coming out of her room with random dinosaur toys, trying to convince me that they were monsters so she could cash in. I told her I would only pay the reward for a real monster, and he needed to be captured alive.

Now she's torn. She really doesn't want a monster in her room, but she really, really wants that money. It's a Catch-22.
Posted by Karen at 9:21 AM 1 comment:

... to say Happy St. Patrick's Day from the goose: 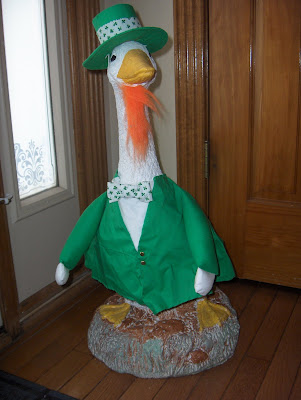 I've been away from the blog for a while. There's no good reason, really. As more and more time went by, I'd think, "Well, I can't post something now unless it's a super interesting post!" Then I could never think of anything good and my brain would curl up in the fetal position from all of the horrible pressure. I know. My life is really tough.

But this morning FedEx brought by a fresh supply of 18-thousand-dollar pills, and my nurse called to tell me that my M-spike is still 2.7. It's not any better, but it's not any worse. So that's good, although I guess I expected better for 18 grand.

I thought I'd find a fresh photo of Bon Jovi at the same level of shirtlessness as last month. I found a nice artistic one. You know it's artistic because he looks like he's thinking of something really important: 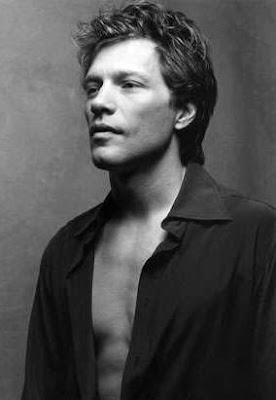 Just this morning, I read an article in the newspaper about how Jon Bon Jovi was complaining about how he didn't understand iPods. It's tough to be elderly.
Posted by Karen at 1:05 PM 2 comments: