WCK: Who's the mayor of Kansas City? (Note: I'm pretty sure she only knows about mayors because of the Mayor of the Munchkin City.)

ME: His name is Mark Funkhouser.

It actually went down.

It's the magic NKOTB cloth. It has healing powers.
Posted by Karen at 3:36 PM 5 comments:

WCK sums up my life

This morning, WCK and I were playing pretend: She was the grown-up and I was the kid, and she was putting me to bed.

"What are you going to do after I go to sleep?" I asked.

"Oh," she said, "go downstairs, load the dishwasher, write a bunch of big words, and try to stop Daddy from acting silly."

Yep. That sounds about right.
Posted by Karen at 1:52 PM No comments:

The Cloth is here.

Very, very rarely do I ever remind people that I have cancer so I can get special treatment. The closest I come to doing this is when I end particularly humiliating posts with the words, "You can't make fun of me. I have cancer." This time, I want to remind everyone of this fact right up front, and I want to remind people of this very frequently, because the temptation to make fun of me for what I'm about to share is going to be too much for some of you to bear. Then you'll feel all guilty for making fun of someone who has cancer, and, you know, I just don't want to put you through that. I'm only thinking of you.

So, The New Kids on the Block just came out with a new DVD filled with concert footage from the reunion tour as well as in-depth interviews.

(I'll pause here so you can fight the urge to make fun of me. It's about to get worse, and you'll need your strength.)

If you pre-ordered the DVD through the NKOTB web site (which, of course, I did, because I have cancer and nobody can make fun of me), you also got a free gift: 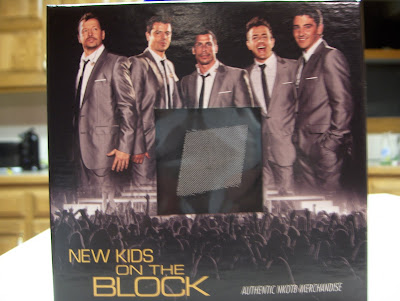 What is this? What is that funny little rectangle in the middle of the attractive cardboard display?

It's a tiny piece of cloth from one of their outfits.

The DVD and The Cloth arrived in the mail on Thursday, which was perfect timing. Jay and WCK went to a Daddy-Daughter Dance on Friday, which meant I was home alone and free to watch my DVD and gaze lovingly at The Cloth without anyone (Jay, mainstream society) making fun of me.

About halfway through the DVD, I heard vague, ax-murderer-like thumping sounds outside, as I always do every time I'm home alone. My first thought was not that the ax murderer was going to kill me, but that

b) said killing would mean I'd never get to see the rest of the DVD, not to mention the Bonus Disc, which features a Q&A session from the official New Kids on the Block Cruise. ("If you could have any superpower, what would it be?" Jordan said he would be Elastic Man.)

But nobody broke in, and I finished the DVD and all of the bonus features, and the whole thing was glorious. Glorious, I say!

I was in the waiting room at the cancer center on Wednesday, and a fellow patient, a suit-wearing man, was talking very loudly into his cell phone. In the first conversation, he was upset with someone at his workplace for sending out a letter that was going to affect someone named Rex.

"We're going to lose Rex now," he said, "because I know Rex, and Rex is a man of honor, and now Rex is going to believe that we're not men of honor. Fortunately, (some other guy) hasn't heard about this yet, because he's in Jakarta."

He hung up and immediately called someone else: "John? This is Tom. Have you been able to reach the embassy?"

You might remember that WCK and I tried to adopt a pet goldfish two years ago. I was turned away by the fish lady at PetSmart, who expected me to purchase a $50 aquarium and then endure a 5-day waiting period to adopt a 12-cent fish.

I finally decided we were ready to try again. This time, we went for an easy-to-care-for betta fish, who is perfectly happy in a little tiny tank. Nobody at PetSmart tried to stop me this time. Either I look older and more responsible now, or the PetSmart fish department has become less militant.

We now have a little blue and red betta named Jimmy John, after the sandwich restaurant. He's been with us for maybe 10 days, and now the reality of fish-ownership has set in. Perhaps the militant fish lady at PetSmart two years ago noticed I had a small child and was doing me a huge favor by turning me away. It turns out, when you have a four-year-old and a pet fish, you live in constant terror that the fish is going to die.

Several times a day, I'll see Jimmy John bobbing peacefully in his little tank, and I'll wonder if this is it. I'll rush to the tank, trying to come up with a speech to give to WCK about how all living things die, blah blah blah, picturing the very sad funeral in the bathroom, imagining the walk of shame back to PetSmart to purchase Jimmy John II. Then Jimmy John will flick his fins and come to life, and look at me like, "What?"

Jay thinks Jimmy John is messing with me on purpose.
Posted by Karen at 10:41 AM No comments:

Last week, we spent one night at the Great Wolf Lodge in Kansas City, Kan. This is a big hotel with a giant water park right in the middle of it. It was our first time there, and we loved it. WCK got to sleep in a bunk bed in a pretend cave (technically, it was a "wolf den"), which was hugely thrilling for her. She started begging to go back the second we drove away, which is always the sign of a good vacation.

In addition to the water park, GWL has lots of other kid-friendly activities throughout the hotel. One of them is a game called Magic Quest. You go to the gift shop and buy an electronic magic wand that you can then use to go on "quests" throughout the hotel. Several hallways are decorated to look like fantasy worlds, and they have names like, "The Enchanted Forest" or "The Whispering Woods" or "Pixie Hollow". You take your magic wand to a little computer kiosk, and a wizard (who is obviously the star of the community theater in whatever town he is from) tells you what you need to find to complete your quest. For example, you need to go to the Enchanted Forest to find a lantern, and then go to the Whispering Woods to find a treasure chest, etc. You find all of these things and point your wand at them and they light up. If you find all four or five items on your "quest" then you earn a "rune."

In other words, Magic Quest is hugely exciting for a four-and-a-half year old, and way too confusing for a 34-year-old. Fortunately, most of the Magic Quest players were 12-year-old boys, and 12-year-old boys love catching an adult doing something stupid. This worked out well for me, because I was always doing something stupid in the world of Magic Quest, and I could always count on a 12-year-old boy to walk past and say something hugely condescending yet hugely helpful to our quest: "Um. Yeah. Like, are you really trying to fight the dragon? Because you can't fight the dragon until you have found the tree slime."

They would not add a "Duh", at the end, but I knew they were thinking it.
Posted by Karen at 2:14 PM No comments:

Following Jesus ... and the Huskers

Before I begin this story, I have to explain that Jay owns a Nebraska Cornhuskers hat shaped like a giant ear of corn. It looks just like this, although Jay never looks this painfully serious when he's wearing it: 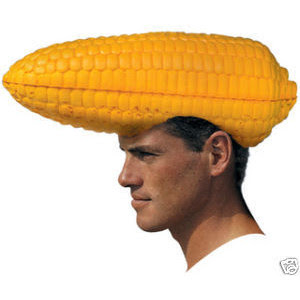 Now for the story. The theme at WCK's Sunday School class this week was "Following Jesus." They had a little worksheet showing pictures of various people who were following Jesus. There was Martin Luther King, Jr., Kateri Tekakwitha, the first Native American to be declared blessed by the Catholic church, and Archbishop Oscar Romero, the martyred bishop of El Salvador. (Note: I am copying these descriptions right off of the worksheet, because the only one of these people I've ever heard of is Martin Luther King, Jr.)

In the fourth space, the kids were to draw their own picture of someone following Jesus. WCK drew a little person with a big, pointy head. Was it the pope? An angel? Her own rendering of the martyred bishop of El Salvador?

"It's Daddy wearing his corn hat," she explained.
Posted by Karen at 4:37 PM 4 comments:

WE WILL ROCK YOU

It's true. The other day, Jay was going through some boxes in the basement, and he came across some coasters that he handcrafted himself in Industrial Arts class in 1989. This first sample, while perfectly lovely, only earned him a C+. We know this because the grade was still written on the back of the coaster. 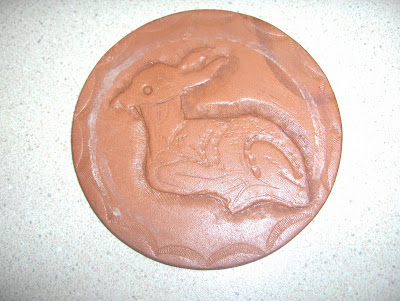 I know! You're thinking, "C+? Really? But I would enjoy setting my Diet Coke can on top of a baby deer, or possibly a baby deer skeleton!" Well, obviously his Industrial Arts teacher knew that Jay was capable of more. That teacher knew that the deer-skeleton coaster, while useful for Diet Coke cans, lacked heart and vision and emotion. You can see that Jay poured all of that and more into the next coaster that he made, which earned him a robust B+. 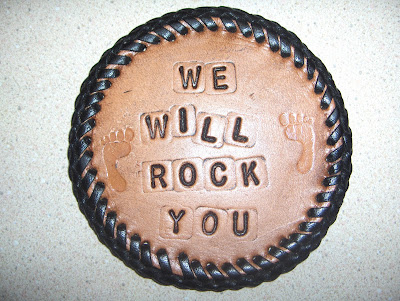 AW, YEAH!!! I look at that, and I truly believe that I'm going to be rocked, possibly by some tiny, barefoot people!

It's the final coaster, however, that brought me to my knees. This next one also earned a B+, but I think it should have earned an A++++, or possibly higher. You won't believe this coaster, people. 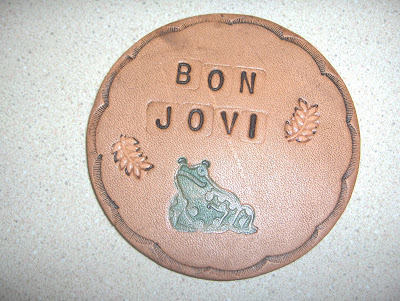 YEEEEEEEEEESSSSSSSSSSS!!!!! Jay claims he doesn't remember making the coasters, so he can't quite explain what a frog has to do with Bon Jovi. I think the frog is demonstrating that everyone can enjoy a good Bon Jovi song, even the amphibious.


I have to add that a) I love Jay b) I warned him that I was going to put the coasters on my blog, and he gave his approval, and c) someday I'll find all of the dorky art projects I made in eighth grade, but, unlike Jay, I'm too lazy to even think about cleaning out boxes in the basement.
Posted by Karen at 1:17 PM 9 comments: