At least she knows how to write

Tonight we cooked a dinner that WCK was particularly unhappy with. (You'll recall the picky eating.) She ran and got her window markers, and she wrote "NO NO NO NO NO NO" all over the windows.

Jay and I had to do that parenting thing where you pretend like you're upset with your child, when really you're thinking that they're incredibly hilarious.
Posted by Karen at 9:16 PM 4 comments:

The best of both worlds

We brought our goose indoors on Christmas Eve so that the goose-sized Santa outfit wouldn't get buried in snow during the big Christmas blizzard. I realized that I liked having the goose inside with us, so we've left it right inside the front door. Not only is he/she protected from potential goose thieves, there are more opportunities to dress him/her up every day. Just this morning, I walked past the goose, only to discover the goose had become Hannah Montana. Who did this? I'm not sure. 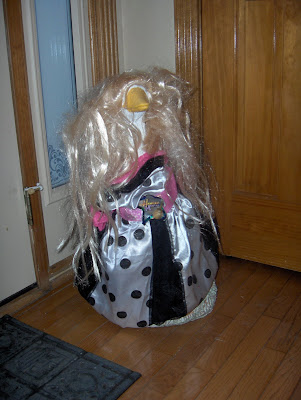 Who hasn't felt this way?

On the way home from preschool today, WCK told me there was a little boy she'd wanted to play with at school, but he said he didn't want to play with her.

Tonight, WCK watched Mary Poppins for the first time. This was one of the first movies I ever saw in the movie theater, and it's still one of my favorite movies of all time. WCK absolutely loved it, especially the "Spoonful of Sugar" part where the toys put themselves away. She did run from the room during the chimney sweep dance, claiming it was "scary". For some reason, she can't bear to watch people get mud/dirt/fake soot on them. I refused to fast-forward because, dang it, the chimney sweep dance is the best part of the entire movie. Am I right?

After I put WCK to bed, I kept hearing loud crashes from upstairs. I discovered she was "playing Mary Poppins" by jumping off her bed with an umbrella. At least it made an impression. 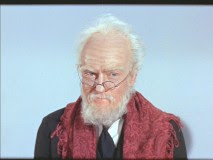 Sweatin' with the oldies

I take strength-training classes at a local fitness center on Mondays, Wednesdays, and Fridays when WCK is in preschool. The Monday class is a normal exercise class, taught by a young woman with zero-percent body fat who likes to yell at us to "hustle". I can never quite bring myself to the "hustle" level, but I also don't lie down on the floor and die, which is what I feel like doing, so that must count for something.

The class on Wednesdays and Fridays, however, is filled with people who are at least 30 years older than I am. Maybe 40. Even the instructor is getting up there. She's often saying things like, "Somebody turn on a fan; I'm having a hot flash!" She likes to tell us how working our biceps will help us with important activities around the house, such as lifting our grandchildren. We do exercises that are supposed to keep us from breaking a hip.

Please don't think I'm mocking this class. I came to the horrible discovery that this class is much more my speed. I don't feel like dying at the end; I feel highly successful that I made it through a workout. And some of these older ladies are much stronger than I am. I know the instructor could kick my butt, hot flashes and all. Plus, she plays greatest hits of the '80s, which I enjoy. I can feel the St. Elmo's fire burnin' in me.
Posted by Karen at 9:21 AM No comments:

Stable: It's not just for horses anymore

This is exactly what it was in early December. Also, my beta-2 microglobulin is hanging in there at a nice, low 1.2. Hurrah!
Posted by Karen at 12:18 PM 4 comments:

WCK has been making lots of snowman projects at preschool. This one is breathtakingly adorable: 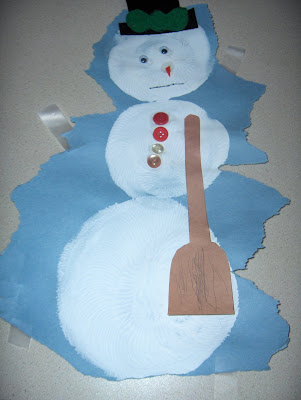 This one looks like the snowman is coming to life at night to kill people: 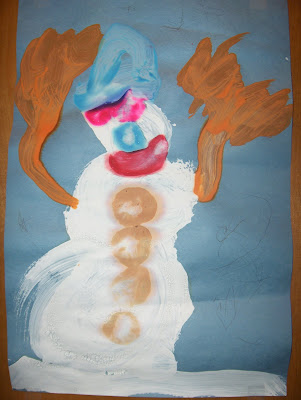 Mom, Dad, you were delicious

My parents gave WCK a cute chef's kit for Christmas. It has a puffy chef hat, an apron, a little tiny oven mitt, and some kitchen tools. They also gave her a cookbook called "Silly Snacks." WCK has been a picky eater of late, but I discovered that if she helps prepare the Silly Snack recipes while wearing her chef outfit, she will actually eat the food. This is a big deal.

We've already prepared several of the Silly Snack recipes, including cheese pizza cut into fun shapes with cookie cutters, and "Rock 'N Rollers", which consist of turkey, cheese, and spinach leaves rolled into whole-wheat tortillas. Now, if I had made these on my own and told WCK they were "turkey, cheese, and spinach rolled into whole-wheat tortillas", WCK would have complained bitterly and refused to touch them. Because they were called "Rock 'N Rollers", and because she helped prepare them while wearing the chef hat, she ate every bite and asks to have them again.

Yesterday, we made some Happy-Face Sandwiches, which consisted of turkey and cheese on an English muffin. (We used those flat, whole-wheat buns that you can get now. I think they're called "Sandwich Thins".) I melted the cheese on mine in the broiler. WCK did not want melted cheese, but that worked, too. Then we made faces on top of the cheese with different vegetables, pickles, etc. I was trying to figure out a use for broccoli, so I made a moustache on one of my sandwiches. Then I was shocked to discover that I had made my parents: 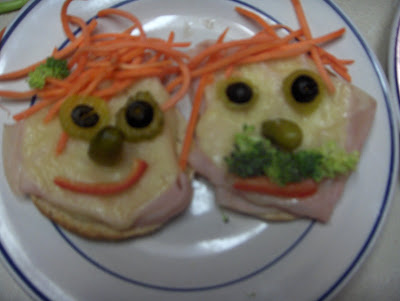 Seriously. If you have never met my parents, you have to know that that is exactly what they'd look like if they were reincarnated as sandwiches.

WCK told me that her sandwiches were supposed to be her and me. I think I'm the one on the bottom: 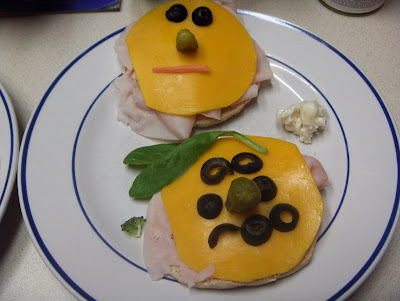 WCK ate most of her meal, and then she said that we'll have to make them again and again so we can make all of our extended-family members. Heads up, extended family! Watch the blog for your face in sandwich form.
Posted by Karen at 9:41 AM 7 comments:

One of WCK's presents from Santa was a Leapfrog Tag Reader. It is the coolest invention ever. The Tag Reader looks like a giant pen. You buy special children's books to go with it; most of them are well-known children's classics, or books based on popular cartoons, etc. You go online and download each book into the Tag Reader, and then when you touch the end of the pen to the book, it reads to you. It can either read the entire book, one page at a time, or one word at a time. If you touch illustrations, they'll talk to you, and you can also play different games on every page. WCK will sometimes sit and play with her Tag Reader for an hour or more. We all love that thing.

Last night, however, we discovered that kids can earn "rewards" by playing the games with the Tag Reader. I'm not sure what these "rewards" are yet; all I know is that a voice on the Tag Reader told WCK to go get her parents and tell them to hook the reader up to the computer so she could get these rewards.

The Voice told her this when she was supposed to be going to bed. When I heard her calling for me, I told her she had to go back to bed.

Still, for an hour of peace and quiet, it might be worth it.
Posted by Karen at 8:54 AM 3 comments:

I don't expect anyone to understand, but ...

If you know me -- or if you read this blog on a regular basis -- you know that there are several Stupid Things that I enjoy getting All Riled Up About. One: People doing anything Christmas-related until the day after Thanksgiving. Two: Anyone but Judy Garland singing Over the Rainbow. As I've mentioned before, when I run the universe, I will ban everyone from singing Over the Rainbow. If there's some kind of dire Over the Rainbow emergency, I will allow Liza Minnelli to step in. Maybe. It depends on how dire the emergency.

Who would have thought my top two pet-peeves would converge into a Perfect Pet-Peeve Storm?

Every year, Hallmark sells Wizard of Oz keepsake ornaments. I have nearly every Oz ornament that's been made since they started in 1993. This year, one of the ornaments features Dorothy sitting in the farmyard with Toto, and when you press a button, the ornament sings Over the Rainbow. Of course, I waited until the Monday after Thanksgiving to go looking for my ornament, and they were all sold out in Kansas City, because people are insane. I immediately e-mailed all of my family members in other towns. Finally, my sister-in-law -- bless her -- was able to find the very last Over the Rainbow ornament at a store in Omaha.

I was so excited. It's a beautiful ornament. Dorothy and Toto look very cute, and it even has little tufts of real-looking Kansas prairie grass.

Then I pressed the button.

It's not even a good Liza impression.

I want to write an outraged letter to Hallmark, but the only words that will come are, "Dear Hallmark, ARE YOU TRYING TO KILL ME??!??!?!"

To make things worse, WCK crawled under the dining room table with the ornament and kept pressing the button over and over, because she knew it was gnawing at my soul. "Do you hear this, Mama? Do you hear this? HA HA HA HA!"

Now I've calmed down, and I know everything will be OK. I can still enjoy my ornament, as long as nobody ever presses the button, ever again. At least I didn't find an incorrect apostrophe on the packaging. I'd probably be in a straight jacket right now.
Posted by Karen at 8:38 PM No comments:

My mom got WCK some "window markers", which are exactly what they sound like. They're markers that draw on windows. I can't see outside anymore.

Anyway. Today, WCK drew a doodle on the window. It looked like a man holding something and standing next to a small animal. WCK explained that she'd drawn a Garfield cartoon. Every morning, I have to find Garfield in the newspaper and read it to WCK, and she always laughs uproariously, even when Garfield makes no sense, which is always.

WCK explained her comic strip: "Jon has a cup of coffee," she said, "and Garfield says, 'There's no coffee in my cup!' HA HA HA HA HA!"

Frankly, that was much funnier than the average Garfield strip. I think she has a real future as a cartoonist.
Posted by Karen at 8:28 PM 2 comments: