I had my first blood test after quitting Rev, and my M-spike is up to 2.0. It was 1.7 in May. At first, Jay and I freaked out, and then we decided not to freak out because

2. It's up a little bit, but it's not like it's Cancer Cells Gone Wild in there. It's not like they're rolling a keg up the lawn going, "Woo! The Revlimid went out for the evening! Let's trash the house and drive the car into the lake and go streaking!! Woo!!" It's more like, "Oh. I believe the Revlimid is gone. Let's have some pie."

3. Maybe they'll all have their pie and go to sleep, and it'll stop going up.

The nurse said all of my other numbers were really good, and my beta-2 microglobulin was pretty low at 0.9 (that's good). Let's just ignore Spike until September, shall we?
Posted by Karen at 8:37 PM 1 comment:

I suppose I should post something sensible now, so that if any newcomers stumble across my blog they won't immediately see that NKOTB video and think I'm completely insane/immature/lame/14 years old.

I can be sensible. Really.

I got a comment on one of my older posts from a woman recently diagnosed with smoldering MM. She wrote:

"Hello, I've been reading through your blog as I've just been diagnosed with Smoldering Myeloma. I have 2 kids under 5 and am v scared. I have been told I have a 1 in 3 chance of developing myeloma but not much more. I wondered if you had any guidance on good questions to ask...I'm very confused!It seems in the UK SMM isn't considered serious enough to get support. I can't find anything without reading all about Myeloma and I'm trying not to do that. But unless you have cancer there isn't much around.All I know so far is that I have raised protein, raised light chain readings and abnormalities in my bone marrow."

She didn't leave an e-mail address, so I'll try to answer her questions in a post.

First of all, hang in there! Smoldering myeloma can often be more stressful and scary than "real" myeloma, because there is nothing you can do. You just go to your tests every few months and hope that all of your numbers stay in a good place, but it's not like you're really "fighting" cancer. I always felt like I was trying really hard not to fight cancer back when I was smoldering, because I just didn't want to tick it off.

Back when I was first diagnosed, I wrote a long post about what all of my numbers meant and what the doctors were looking for. Reading that might be somewhat helpful. A quick summary: When I was smoldering, the doctors wanted be sure that I wasn't becoming anemic, that my kidneys and bones were OK, and that my white cells weren't too low. As long as that checked out OK, I was in the clear and didn't need to start Revlimid yet. I had checkups every two to three months to check all of that and to see what my M-spike (a measure of the myeloma) was doing. Some smoldering people have M-spikes that are totally stable and just sit there and do nothing; unfortunately, mine would go up just a teeny little bit every time. Stupid Spike.

Probably the most important thing (I think) is to base the decision to start treatment on trends that have been going on for a while (like a slowly rising M-spike), and not one single test. Good luck, and please, comment again any time and send me your e-mail if you want! Are there any other smolderers out there who have more advice?
Posted by Karen at 8:21 PM 2 comments:

Those of you who are Completely Normal will not understand why this is a big deal. Those of us who have a serious NKOTB Problem (Has this been classified as a mental illness yet?) will grow shaky with emotion when Jon sings Step Five and all of the other guys start jumping up and down. I could watch this every day for the rest of my life. Maybe in the afterlife, too.

Lincoln on a stick

I've been neglecting the blog lately, but I do have an excuse. We were out of town for a week on vacation. We didn't drive too terribly far, but we saw everything. We drove across Missouri and spent some time in Hannibal, where we rode on a riverboat, toured a cave, and saw all kinds of Mark Twain stuff.

Next, we visited my sister, brother-in-law, and niece in Jacksonville, Ill. For the next few days, they took us on some whirlwind tours of Springfield and the area, where we saw all kinds of Abraham Lincoln stuff. The Lincoln Museum is really, really cool. There is a fun place for the kids to play, where they can dress up in costumes, play with old-timey toys, and play in an old-fashioned kitchen with a pretend fireplace and butter churn and things like that. This play area was a good thing, because WCK wasn't too fond of all of the wax figures and loud noises that dominated all of the other exhibits. She and her cousin were able to play in the play area while the adults visited the exhibits in shifts.

They were very good exhibits. I was shocked and pretty choked up when Lincoln died at the end.

Then we went to the gift shop. WCK had a lot of money saved up from her birthday, so I told her she could use that to pick out souvenirs on our trip. I was worried she'd pick out dumb things that I'd have to abide by, but she did an excellent job managing her money. She was very careful and would look at everything in each shop, and then she'd either decide she didn't want anything or would pick out just one thing. This is what she picked out at the Lincoln Museum:

That's right. It's Abe Lincoln's head on a stick. When you pull the lever on the bottom, he moves his mouth.

I love this toy. I think this is the greatest toy ever, but I would have felt absurd picking it out on my own. I was so happy I could use WCK's whims as an excuse. "She's paying for this with her own money," I told the old ladies in the cash-register line, who looked a little disapproving when WCK was attacking me with the head and growling, "ABRAHAM LINCOLN IS GONNA EAT YOUR NOSE!!! HAHAHAHAHA!!!"

Secretly, though, I loved the fact that Abraham Lincoln was going to eat my nose. I loved that Abe Lincoln on a stick was with us for the rest of our travels. My brother-in-law got some video footage of Abe lip syncing to Hannah Montana in the car

After several days of Lincoln sites, we headed to St. Louis for a couple more days. We went to The Magic House, a very cool and very crowded children's museum. We went to the top of the Arch, walked all around downtown, visited the Science Center and Union Station, and toured the Anheuser-Busch brewery. I'm sure taking our child on a brewery tour makes us terrible parents. What would Abraham Lincoln say? I'd ask him, but he's eating my nose.
Posted by Karen at 8:08 PM 1 comment: 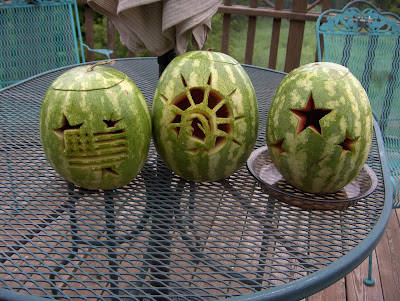 Yeah, I found some patterns. I'm not that talented. One of the benefits of being a pack rat is that I found an old pumpkin-carving kit that I bought the Halloween after 9/11, when patriotic stuff was everywhere. It was even on pumpkins, apparently.

But it turns out that watermelons are much easier to cut than pumpkins, and, unlike pumpkins, you can eat the insides. WCK probably consumed an entire watermelon by herself.

We also went to a little parade, and we set off fireworks at my parents' house. We spent WCK's college fund at the fireworks store, only to have WCK claim that all fireworks were too loud and scary (even the smoke bombs), and refuse to watch them. We finally convinced her to watch from the living-room window, which actually turned out to be pretty fun.

Our neighborhood here in Kansas City always goes pretty crazy on the Fourth. I'm not sure what happened while we were gone, but Garland was still refusing to come out from under the bed when we got back. I guess you know it was a good fireworks show when cats are still scared one day later.
Posted by Karen at 8:54 PM 4 comments:

We need to stop teaching her about nature

Last night, I told WCK for the hundredth time that she needed to go to bed.

"I think the whole family should work together and build a new goose," said WCK, "and we can paint it rainbow colors!"

"And," she continued, "we'll put BIG SPIKES in its head to scare away anyone who wants to steal it!"