I'm using my laptop without being cold!

My 34th birthday is not until tomorrow, but I've already been celebrating for a few days. My parents were here for the weekend, and my mom and WCK made me this excellent Wizard of Oz birthday cake while I was away at exercise class: 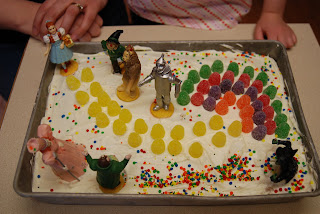 It was a white cake with rainbow confetti, topped with frosting and rainbow sprinkles, and a gumdrop Yellow Brick Road and rainbow. The figures on it were my toys, which I've passed down to WCK. And, yes, they were well washed ahead of time. At least that's what they told me. You can't really tell from the photo, but the witch is actually half-buried in the cake, like she's melting in it. When we pulled her out, she was covered in cake and frosting. I declared that since it was my birthday, I got to lick the witch.

That's a new life lesson for you all: Sometimes you have to treat yourself. Lick the witch.

After the witch licking, Jay took me out to dinner at Genghis Khan, and then we went to see Phantom of the Opera at the Kansas City Music Hall. I'd never seen it before. I loved it, don't get me wrong, but I'm a little confused. Here was the plot: Creepy guy lives in the basement and can't get the girl he likes to go out with him, so he starts annoying people. That was it? Really? Then again, Les Mis is about a guy who steals a loaf of bread, and Cats is about ... um, I guess I've never really understood what Cats is about. At least they all have some catchy tunes.

And finally: In addition to the Phantom tickets, I got the best present ever. As I've mentioned before, I am always cold and searching for innovative ways to warm up. Months and months ago I saw the following infomercial ...

... and I knew, right then and there, that I HAD TO HAVE A SNUGGIE. I have been begging for a Snuggie ever since, because, I don't know, I'd feel silly buying one for myself. Imagine my thrill when I opened my birthday gift and found, yes, my very own Snuggie! It came with the free book light, too. I am wearing it right now as I type, and I can't wait to knit or play backgammon. Of course, I don't know how to knit or play backgammon, but I'm pretty sure that the Snuggie has magical powers that will enable me to do these things.

WCK was in cahoots with Jay and was excited to give me the Snuggie ... until I put it on. Then she ran screaming upstairs, terrified. She hates the Snuggie. I'm not sure if she's having premonitions of me wearing it to chaperone her eighth-grade dance, or what. (And, really, if it is chilly in that gym, I just might.) Jay says that we should use it as a discipline tool. You know: "If you don't go to bed right now, Mommy is putting on the Snuggie!"

Anyway. To avoid scarring her for life, I can only wear it when she's asleep. Let's hope that I'll only be invited to marshmallow roasts or football games during the late evening hours.
Posted by Karen at 4:34 PM

Thanks for making me laugh with your Snuggie. The only thing is all the people in the ad look as if they belong to some weird sect (druids?).
Anyway I am basically writing to say I really enjoy your blog. Mary in Paris, France

The Snuggie!!! My kids LOVE that commercial. They tell me I need one all the time. Um, I would be the complete opposite...I'm always too warm. But they think the thing is so cool that they still try to convince me...

We saw Phantom, and I was also confused by the plot. I decided to just not think about it.

Karen, thanks for another laugh. I hope you are having a VERY Happy Birthday. Celebrate all week long. But only 34? Good grief, I have socks older than that. (I was going to say underwear, but that would be gross!) May you have many, many more wonderful Birthdays and may you celebrate your 100th birthday wrapped in your Snuggie. I just hope WCSA (senior adult) will visit you in the nursing home when you are wearing it!

Your blog makes me laugh, thank you. And, I really want a Snuggie myself (for 8th grade dance purposes, of course).