Here are photos of the cupcakes I made for the MOMS Club Halloween party on Friday. I'm going to make another batch for another party we're going to tomorrow, too: 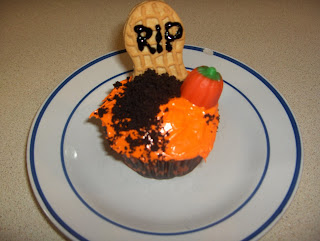 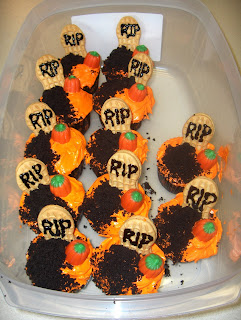 They were very easy to make. Orange frosting, Nutter Butter grave stones decorated with black frosting, Oreo crumb "dirt", and a candy pumpkin. I wanted to write something more interesting than "RIP" on each one, but there's only so much one can say on a Nutter Butter. Also, the Nutter Butters seemed to absorb the moisture from the cupcakes, and they got a little mushy. If you prefer crisp Nutter Butters, don't stick them into the cupcake until the last minute.

WCK is going to be a witch for Halloween. As you can imagine, she is a very cute witch. If she wanted your Ruby Slippers, you would hand them over immediately, so charmed would you be by the cuteness. I taught her to respond to the question, "What does a witch say?" (Her answer: "Get you, pretty, and little dog, too!"), but, of course, she won't say it for anybody except me. I'm also trying to teach her to cackle in a menacing way, but she can't quite master the menacing part. Maybe next year.
Posted by Karen at 2:29 PM

Those cupcakes look wonderful! I received a very nice thank you note and a receipt from you, thank you for the thank you.